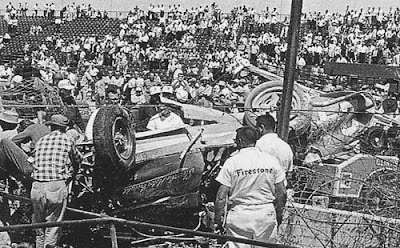 Indianapolis, Ind. (May 12, 1961) — Tony Bettenhausen, 44, whose greatest ambition was to win the richest of all auto races, died because a nickel's worth of wire broke on a car he was testing for a friend at the Indianapolis Motor Speedway.

Bettenhausen was killed instantly when the roaring racer hurtled into a wall and burst into flames Friday.

Speedway officials said the cause of the accident was a cotter pin worth about five cents.
The sheared pin let a bolt fall, and when Tony stepped on the brakes, the axle twisted, flinging the car into the outside retaining wall on the northwest turn.

Bettenhausen, Tinley Park, Ill., was dead when guards fought their way through horrified fans to where the smashed car hung wrapped in wire atop the wall.

It was Bettenhausen's 29th wreck in a race car. The first was in his first race at Chicago 23 years ago.

The stocky little Dutchman's death came while his own car, with which he hoped to break records at today's time trials for the 500-mile Memorial Day race, was sitting in a speedway garage.

Bettenhausen was testing for a long-time friend, Paul Russo, formerly of Kenosha, Wis.

He would have spent a great deal of his time in Milwaukee this summer. Less than a month ago, he signed with Milwaukee's Bill Trainor to drive the latter's 1961 Ford which topped the 159 mile per hour mark in a run at Daytona Beach, Fla.

This was to have been the final season for Bettenhausen. But he had said that before…

When last referring to his plans, he said, "I want to win the 500, the national stock and the big car championships and retire in a blaze of glory. Then when I become a racing official no one can say I didn't have the savvy to hold such a position."

There was no one to challenge his knowhow, this year, or during many of the 22 years he was a racing driver.

Only Wednesday, Tony had turned in a 149.245 mile per hour lap - the fastest ever recorded in traffic on the 2.5-mile brick and asphalt track.

Bettenhausen's death was the 53rd fatality at the Indianapolis "brickyard," opened in 1909 as a dirt track. He was the 30th driver killer. The toll involves 14 mechanics and 9 spectators.
Bettenhausen was born in Tinley Park, where he farmed 600 acres of corn and soybean land with his two teen-age sons, Gary, 19, and Merle, 17.

He also is survived by his wife, Valerie, and two daughters, Susan, 15, and Tony Lee, 9.

The entire family had planned to attend qualifications at the track today.