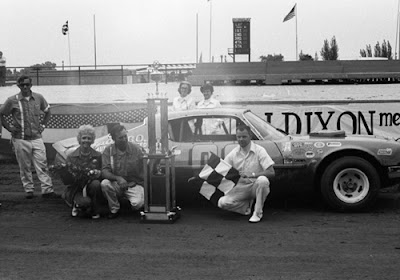 Ron Weedon of Pleasant Valley, Iowa,
is joined by his wife Dee after winning the Frank Dixon Memorial at the Springfield Mile. (Terry Young Photo)
Springfield, Ill. (May 26, 1974) – Iowa drivers were able to sweep the top three spots in the $8,000 Frank J. Dixon Memorial late model stock car racing promoted by the ladies of the Dixon Racing Association of Peoria, Ill.


The top cash prize of $1,500 was earned by Ron Weedon of Pleasant Valley, Iowa, who led from his pole position and fought off a late closing challenge from Curt Hansen of Dike, Iowa, who had been trading off the second spot with Darrell Dake of Cedar Rapids, Iowa.


Glen Gettenmeier of St. Charles, Mo., was fourth, several car lengths back as the checkered flag waved for Weedon. Bill Scherer of St. Louis, Mo., finished fifth and Earl Hubert of Aurora Park, Ill., was sixth for the best driver from the state of Illinois.


Weedon’s wife Dee, said in victory lane with her husband that it “was the biggest win in all of his years of racing”. Weedon received the 6-foot Frank Dixon Memorial trophy presented by the late Frank Dixon’s daughters Doris and Gerry Dixon James.


Rain had postponed the event from Sunday, May 26, when showers fell after only seven of 60 cars had taken time trials. Some of the car were unable to return because of work schedules made necessary because of Illinois vote to recognize the traditional holiday of May 30, rather than the federal date of May 27.


Sam Reakes of Rockford, Ill., was the winner in the 20-mile semi-feature and he took the lead from his pole position. Jim Strube of Peoria, Ill., was second for most of the race but dropped out with only a few laps remaining.