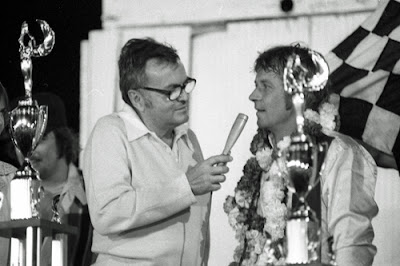 Leavitt, who also won the semi-feature to earn his main event starting berth, watched as Johnny Parsons and Larry Gates dominated the opening three-quarters of the feature, before finally taking the lead for good on the 33rd circuit.

Parsons led the first 27 laps before Gates took over on the 28th round.

Parson’s comeback hops were dimmed moments later, when he and Larry Rice spun and stalled while dicing for second place. The miscue forced both drivers to restart at the back of the field. Shortly after the restart, Gates’ mount developed mechanical problems, which helped Leavitt gain the upper hand and eventually force Gates from the contest.

Parsons and Rice exited the race a few laps later, when Parsons spun again and was hit by Rice.

Meanwhile, Leavitt had no problems running at the front of the pack and cruised to victory, crossing the finish line ahead of Steve Chassey, Pancho Carter, Sheldon Kinser, Bobby Olivero and Mack McClellan.

Gary Bettenhausen accounted for the day’s lone record, when he toured the half-mile dirt oval in 22.64 seconds during time trials to erase Bubby Jones’ year-old standard of 22.71 seconds. Bettenhausen also won the first heat but was sidelined early in the main event, in which he was credited for 15th.