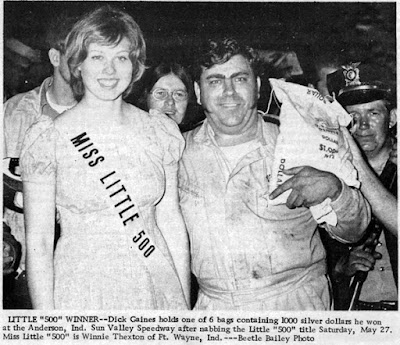 Gaines turned the 23rd annual Little 400 upside down Saturday night as he drove Sun Valley Speedway like an old man out for a Sunday afternoon ride. The husky veteran breezed to a four-lap victory in the rain shortened Little 500 to take home $5,910 in sliver dollars.

After Gaines “got snookered” at the start, he recovered quickly. The Floyds Knobs, Ind., resident took the lead on the 11th lap and was home free. He had built up such a lead by the 237th lap that he pitted for fuel and did not lose his position.

Chasing Gaines at the time the rains fell were Bobby Black of Taylorsville, Ind., and Butch Wilkerson of Deputy, Ind. Black had an eight second advantage on Wilkerson when the rain started falling with Gaines on lap 266.

Saturday night marked the first time the Little 500 has ever gone less than the full 500-lap distance. In both 1958 and 1968, the race was halted temporarily by rain but was resumed to finish the prescribed distance both times.

The rain cost Gaines some lap-prize money since the leader picked up $5 per lap. But, in the long run, it probably was a blessing.

Gaines' car was starting to run a little warm and severe problems might have cropped up later in the race.

Other problems might have cropped up, too, since the first eight cars were only 10 laps apart.

Gaines had only a four-lap lead on Black and Wilkerson with Jim Murphy two laps further back, defending champion Jeff Bloom another lap back. It was then one lap back to Calvin Gilstrap, another lap to find Joe Demko and Bobby Kinser. Richert had a seven-second lead on Kinser. Demko lost several positions just before the yellow flag came out with Gaines on lap 266 because of the light rain. Demko was driving relief for Jerry Richert and had a few problems adjusting to the car.

While he was adjusting, several cars got by.

“I'm really sorry the race was stopped,” Gaines said. “At least, I think I am. I may decide different after I have the money.”

“Really, we were running good and it was a good, clean race. The track got slick once when someone dropped oil down the front stretch but it was really nice.”

Gaines appeared to be able to drive as fast as he wanted to run and in almost any groove on the track. He was passing cars in the turns and on the straightaways and getting around both high and low on the track.

Black lost some time early but was in a good position to make a run at Gaines. He stopped for fuel early when Bobby Mitchoff spun in the first turn and brought out the yellow for five laps.

“We look on enough fuel,” said Black, “that we could have gone the rest of the way with just one more stop. We were waiting for a yellow a little later in the race to make a stop.”

“Then, it could have been interesting,” grinned Black.

Gaines, Black, Wilkerson, Gilstrap and Kinser are apart of the Southern Indiana contingent in this year's Little 500. They run against each other throughout the Midwest in both dirt and paved-track shows.

Herman Wise of Atlanta, Ga., the 1971 winner, brought out the first yellow light of the night on the 31st lap when he spun in the first turn. A quick push got him rolling, however, and he lost only a little over a lap.

Moments later Al Liskai of Gibsonburg, Ohio, blew his engine and put a thick layer of oil on the front stretch. The yellow was out for 21 laps while track crews dusted down the oily section on the track.

Gaines figured he “got snookered” on the start by starter Butch Brooks.

“We were told in the driver's meeting,” Gaines said, “that we would go around one more lap on the yellow after the pace car pulled off the track. But the pace car left and we got the green two turns later. “Why, I was driving almost in the infield when I saw that guy (Brooks) drop the green flag. People went past me like a strong wind. I was third before I got to the starting line.”

Gaines trailed Richert and Calvin Gilstrap through the first few laps before moving up. He got past Gilstrap on the seventh lap and took Richert to lead the lap.

It was a breeze from there.

By the 102nd lap, Gaines had lapped all but two cars in the field - Gilstrap and Armond Holley. Jim Riddle brought out the yellow flag when he threw a wheel in the fourth turn and came to a stop against the outside guardrail.

On lap 152, Gilstrap pitted for fuel white running second. The Salem driver scattered people in the infield by driving through pylons blocking the center of the infield.

Gilstrap said later he was out of fuel and made a straight line for his pit. He lost nearly two laps because he entered the pits in the wrong area and had to make nearly one-and-a-half laps before he was scored again crossing the start-finish line.

Holley pitted while running third and Riddle took over the wheel. Riddle later had a flat tire and lost considerable time getting back around to his pit, Kinser, the veteran from Bloomington, was black flagged while running third on lap 185 when his brakes caught on fire. Bob Mitchoff banged the outside wall going down the backstretch on lap 252 and brought out the yellow again. This time he was out for eight laps.

The yellow appeared again moments later when the rain started to fall.