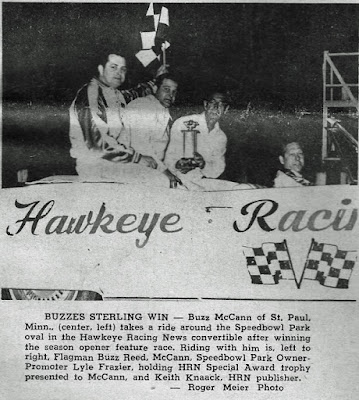 Sterling, Ill. (May 5, 1968) – Buzz McCann of St. Paul, Minn., won the season opener at SpeedBowl Park, leading the 25-lap feature green to checkered.
Fans watched in amazement as McCann, Verlin Eaker, Bill McDonough, both of Cedar Rapids, Iowa, Don Bohlander of Glasford, Ill., Darrel Dake of Cedar Rapids, Iowa, and Jim Strube of Peoria, Ill., ran bumper to bumper and wheel to wheel for the entire 25 circuits.
At the finish, McCann edge Eaker, who started at the rear of the field, by less than half a car length. McCann was presented a large trophy by Keith Knaack, the owner and publisher of Hawkeye Racing News.
A total of 32 cars were on hand for the season-opening program.
Bill Forbes, driving a brand-new 1964 Pontiac GTO, set fast time for the night and showed he’ll be reckoned with for the rest of the season.
Don Bohlander won a hotly-contested trophy dash in front of Tom Hughes of Monticello, Iowa.
Heat races were won by Darrel Dake, Daehle Reitzel of Sterling, Ill., Bohlander and Al Terrell of Peoria, Ill. The semi-feature was captured by Allan May of Brimfield, Ill.