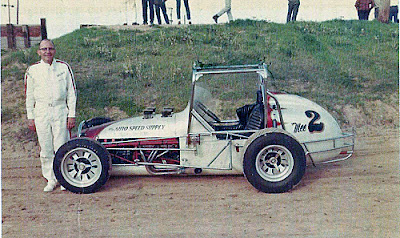 
Jefferson City, Mo. (May 10, 1970) – Bobby Ward, the Arkansas Traveler from Conway, took the checker ahead of Bill Utz of Sedalia, Mo., at the Race of Champions held at Capital Speedway near Jefferson City on Sunday.

The race, which was postponed last October due to rain, paid a total of $3,500 in prize money.

Ward, driving the Alamo Mobile Homes Special from Amarillo, Tex., jumped from his outside pole position on the first lap and was never headed in the 20-lap main event.

The speedy Arkansas driver took home the first-place money of $750.

For Utz, it was also a profitable day. He took first in the trophy dash, first in his heat race, as well as finishing second in the feature.

With Sunday's winnings, Utz, piloting the Dean Hathman sprinter, added to the Friday night's winnings he collected at the Granite City, Ill., track.

Following Ward and Utz across the finish line in the feature event were Tom Corbin of Carrollton, Mo., Roy Hibbard of Marshall, Mo., and Flea Atkin of Jefferson City.

A total of 48 cars timed in for the day’s activity.