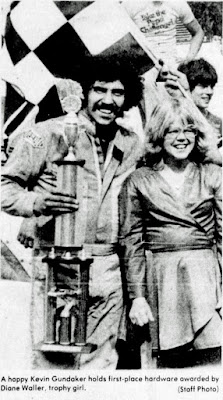 Sedalia, Mo. (May 25, 1981) - Race fans who journeyed to the Missouri State Fairgrounds on Monday afternoon to witness the National Outlaw Stock Car Association winged late model 30-lap feature did not go home disappointed as the race was not decided until the final turn of the last lap when Kevin Gundaker of St. Louis, Mo., took the checkered flag.
Roger Thompson of Junction City, Kan., jumped out to an early lead at the beginning of the feature. Following Thompson, Joe Merryfield of Des Moines, Ken Walton of Viola, Iowa, and Gundaker were running bumper-to-bumper in the battle for second.

A caution flag on lap 11 closed the pack behind leader Thompson and when the green flag reappeared, Walton moved around Merryfield to take second place on lap 15.

On the next lap, Gundaker passed Merryfield to take the third position. On lap 22, Thompson was still in first, but Walton was knocking on the door with Gundaker right behind.

Walton lost traction for an instant on lap 27 in the loose dirt, allowing Gundaker to move around him into second place. Gundaker then set his sights on Thompson, who appeared to have a comfortable lead.
As the white flag fell to signal the last lap, Gundaker was running right on the rear bumper of Thompson and stayed there going into the fourth turn. Coming out of the turn, Gundaker got the bite on Thompson and beat him to the finish.

‘‘Thompson slipped coming out of four as he tried to get around a lapped car and that was the break I needed,” Gundaker said. The victory was worth $2,000 to Gundaker, who led only one-fourth of a lap — but it was the lap that counted most.

In other races, Steve Fuqua of Mayetta, Kan., took the 20-lap, sportsman feature. He was followed across the finish line by Rick Kimberling of Slater, Mo., Pat Wancewicz of Omaha, Joe Cobb of Kansas City and John Craig of Manhattan, Kan. Fuqua also won the sportsman trophy dash. Wancewicz won the sportsman B feature, allowing him to advance to the A feature.

The 15-lap street stock feature went to Randy Gastineau of New Bloomfield, Mo., driving a 1967 Chevelle. Jim Turpin of Jefferson City won both the B and C features in the street stock division.

More than 2,500 race fans turned out for the event.