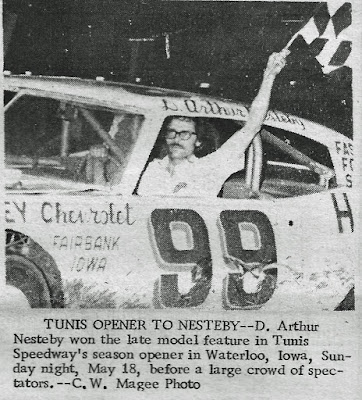 
Nesteby claimed the season-opening main event after selling the car he was racing that night, a recently built Chevy designed to run primarily on half-mile tracks, to Evansdale, Iowa’s Red Dralle.


Next week, he’ll be back in the old No. 99 car that carried him to the championship last season.


Glen Martin of Independence, Iowa, had the pole position for the feature and led the race for the first three laps before Nesteby overtook him.


Nesteby continued in the lead until lap 13 of the nip and tuck race when Martin got around him again. Nesteby would take the lead for good a couple of laps later. He would lead Martin by no more than a bumper when the race was called on lap 24 because of a wreck between Roger Klingfus and Denny Osborn.


“If I would have waited until after tonight’s feature to decide to what car to sell, it would have been a lot tougher decision,” Nesteby admitted. Nesteby indicated his plans for a lighter car failed. His new machine will end up weighing as much as his old one.