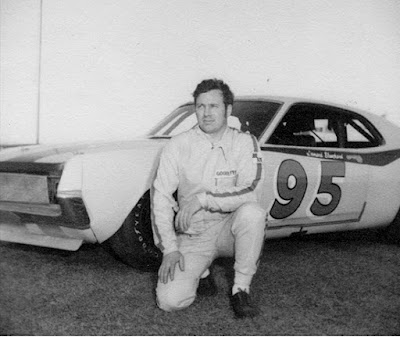 
Odessa, Mo. (May 7, 1972) – More than 4,000 wind-chilled fans watched Leonard Blanchard of Louisville, Ky., win a disputed 100-lap feature victory in ARCA’s first appearance west of the Mississippi River.
Dave Goldsberry of Springfield, Mo., raced into the lead from his outside front row position with Bobby Watson, Ralph Latham, A. Arnold, Ron Hutcherson, Les Snow and Larry Moore closely bunched behind him.
The first yellow flag waved on lap 3 when Moore’s 1972 Monte Carlo broke a right front spindle sending him crashing full-bore into the third turn’s outer concrete wall. The car bicycled some 100 feet along the barrier then slid down the track towards the apron.
The entire right front was sheared away with the wheel landing in the parking lot outside the track. Moore was shaken but uninjured.
Goldsberry continued to lead once the green returned. A four-car battle for second place developed with Snow, Latham, Hutcherson and Blanchard for the next 40 circuits. Blanchard nudged Hutcherson coming off the fourth turn and the Keokuk, Iowa, driver’s 1969 Torino went into a wild slide down the front stretch striking the wall twice before Hutcherson was able to regain control as he entered turn one. Amazingly, Hutcherson lost only two positions during his wild ride.
Blanchard slipped under Snow on lap 53 to take over second. Latham pitted with a flat tire and returned four laps later. By lap 65, Hutcherson had worked his way back into fourth place and then passed Snow for third.
On the 81st lap, Dick Smith spun and caught fire on the homestretch. His spinning Camaro was struck by Al Straub. Both cars partially blocked the track with the field bearing down and forcing Goldsberry into a spin to avoid the wreckage.
The dispute arose as whether the leader had been passed by Blanchard and Hutcherson before he restarted.
The pace car picked up Goldsberry as the leader. At the drop of the green, Goldsberry maintained a four-second margin the rest of the way to the checkers.
But, after an hour and a half of deliberation by ARCA officials, the victory was awarded to Blanchard with Hutcherson second and Goldsberry scored in third. A. Arnold and Iggy Katona rounded out the top five finishers.
Snow won the trophy dash and Don Accurso, Bobby Watson and Goldsberry won heat races.