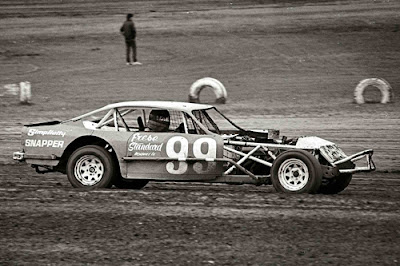 Vinton, Iowa (July 3, 1979) – Keith Knaack, auto racing promoter, official, driver and publisher, has brought a new type of auto racing to Iowa.
While the crowds aren’t exactly rushing to the Benton County Fairgrounds in Vinton, Iowa, for his Saturday night programs, interest is growing.
Knaack calls his new class of cars “International Motor Contest Association modifieds”. They have full-sized car frames but the bodies are from Pinto, Vega, Gremlin and Monza.
And in the interest of conserving gasoline, Knaack requires all cars competing to use gasohol. He also makes available for the cars methanol alcohol, a non-petroleum based fuel popular with sprint car racers.
He’s converting his modified to burn alcohol at a cost of $125 for a different carburetor.
The engines don’t have to correspond either. In his own car, Knaack has a V-6 Buick engine and plan to change to a Buick V-8.
Long an advocate of inexpensive race cars, he is following the philosophy of Vinton.
“The frames can be bought for $20 at a junk yard,” he noted. “A Monza body costs about $50. They can be race-ready for $500. These modifieds are fast.”
They’re so fast Knaack hopes to challenge and beat a sportsman car on the quarter-mile track at Vinton later the season.
The tread on the modified’s tire can be no wider than 9 inches. “That takes away the exotic cams and powerful engines,” he said. “With such small tires, a lot of power won’t do a person any good. He can’t get it to the ground.”
Knaack said seven modifieds are racing and eight are being built. He hopes to have 12 for Saturday night’s races.
“We’ve had rain or potential rain every night we’ve run,” said Knaack, publisher of Hawkeye Racing News. “That has kept our crowds down. We had about 700 fans last week. We need about 1,000 to be successful.”
Why does he call it International Motor Contests Association modifieds? He is one of three owners of IMCA, which was a noted stock car and sprint car circuit until recent years.
Knaack also has Roadrunner 200 and Roadrunner 400 racing. They are also low-cost race cars and are required to have only roll bars and safety belts. A driver must wear a helmet.
The Roadrunner 200 cars can be claimed by anyone who wants to pay $200 for them. If somebody wants a “200”, the car owner has the option of selling it to the claimant for $200, moving up to the “400” class or not racing it again.
The Roadrunner 400 can be claimed for $400. If the owner won’t sell, he also must retire it.
Knaack’s racing program also consists of spectator one-on-one racing and Hare ‘n Hound, a demolition-like race.
“We want to have fun here,” he said, “And we’ve gotten rid of a lot of junk cars around town.”