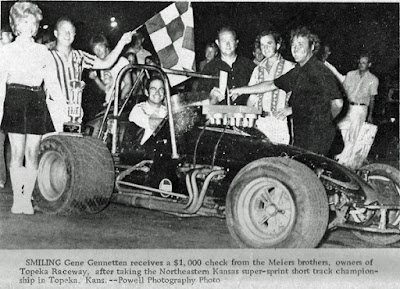 Topeka, Kan. (July 1, 1972) – If the first 30 minutes were any indication to things to come, July will become a great month for Gene Gennetten.
The Glenwood, Mo., sprint car driver pocketed $1,000 before the month was hardly started when the won the Northeast Kansas Short Track Championships at Topeka Raceway in the wee hours of Saturday morning.
The action started Friday but with 39 hot shoes racing and all that money riding on the front end, it took some time to get the program completed. Few, if any, among the largest crowd in the track’s history decided to go home before it was over.
Gennetten, who got his start on the short Olympic Stadium track, still prefers racing on longer tracks, however.
“The money is on the half-miles,” he remarked. “I guess I’ve won more on short tracks, but I still rather run the halves.”
As owner, mechanic, and driver of the #3 machine, Gennetten is quite careful with his equipment. Last week he loaded up for the Mid America Fairgrounds when the machine started vibrating after a heat race.
“It turned out to be the main bearing,” he said of last week’s troubles. “I pulled the engine and put in the smallest one I have. It’s a 327.”
Small engine or not, it was all he needed to hold off Dick Sutcliffe of Greenwood, Mo., which had to be stopped four times due to spinouts on the dry, slick track.


Sutcliffe and Gennetten started on the front row, and the former took off in front at the start – the second start. On the first start, Sutcliffe went too high, hit the wall and rolled.
“It was an easy roll, but it fouled up the handling,” he said of the mishap.
Still, Sutcliffe led the first 16 circuits before Gennetten went to the high side and got past the leader.
Once in the lead, Gennetten never let up, managing to open some distance between himself and Sutcliffe after another restart on the 40th lap.
Eddie Leavitt of Kearney, Mo., moved from his 16th starting position in the 18-car field to take third, getting by Jay Woodside of Kansas City on the white flag lap. Roger Larson of Solomon, Kan., moved from his 15th starting position to round out the top five.
Topekan Thad Dosher had the top time trial, 15.65 seconds, but dropped out of the feature with mechanical troubles.
It appeared Sutcliffe was en route to a sweep of the evening. He bagged the trophy dash and won his heat without too much trouble. Gennetten also won his heat and he and Sutcliffe had identical times, 16.13 seconds, the fifth and sixth fastest, which gave them the front row since the first six fastest were inverted.

Editor’s Note; Gene Gennetten would load his car and pack his gear in the wee hours of Saturday morning and then drive 6 hours to Burlington, Iowa, and race his super modified that evening. He would win the 25-lap feature.