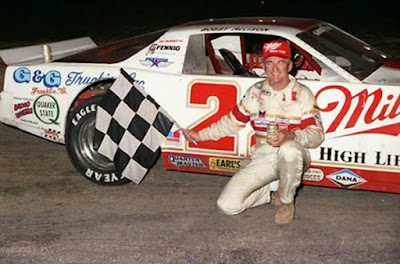 NASCAR star Bobby Allison made a successful trip north by winning the All-Star 100.


Rockford, Ill. (July 17, 1984) – Stock car racing superstar Bobby Allison came up north and showed some of the Midwest’s best stock car drivers the short way around Rockford Speedway as he wheeled his 1984 Pontiac Firebird to victory in the 7th annual All-Star 100 on Tuesday night.
The eighth stop on the ASA-ARTGO Challenge Series late model tour saw the 46-year-old from Hueytown, Ala., capture his first ever feature on the Midwestern stock car circuit.
Using the low side of the high-banked quarter-mile, Allison piloted the Jerry Gunderman-owned mount into the lead on the race’s 82nd circuit slipping underneath some of the Midwest’s top stock car competitors on his way to the front, including Joe Shear, Dick Trickle, Bobby Dotter and Don Leach.
With only two laps to go, the race’s fifth and final yellow waved for what appeared to be oil on the racing surface. Allison, suffering from a flat tire, drove hard to fight off the challenges Leach and Jim Weber in those closing laps.
Streaking down thee straightaways, Allison would almost come to a halt in the corners, almost giving back the lead to Leach a couple of times. Coming down for the checkered flag, Allison and Leach, along with Weber, battled wheel to wheel looking for the win.
Trailing the top three at the checkers were Dotter, Shear, Ken Lund, Larry Schuler, Tracy Schuler and Steve Murgic who the only cars still running from a feature field of 20.
A brief, solemn ceremony was held prior to the event to honor Rockford Speedway owner Hugh Deery, who passed away on July 14.