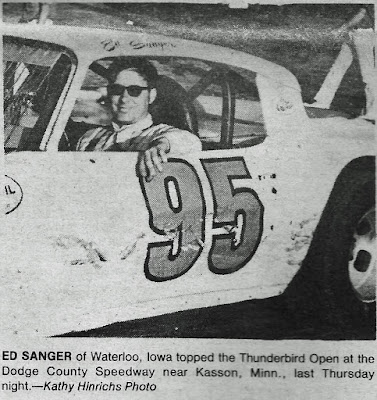 Kasson, Minn. (July 28, 1977) – Ed Sanger of Waterloo, Iowa, proved to be his own best advertising for his Sanger Chassis at the Dodge County Speedway in Kasson, Minn.
Sanger had it “in the bag” taking home a $1,500 payday after winning the first annual Thunderbird Open for late models on Thursday night.
Sanger would win the second heat placing him on the outside of the front row for the 50-lap feature. He would take the lead at the drop of the green and never look back. He was so dominant, in fact, by lap 40, he had three-quarters of a lap lead over his nearest competitor.
The feature would start with a five-car pileup when a good share of the 25 starters bumped each other trying to get around the slower car of Dave Noble of Blooming Prairie, Minn. Noble would back across the track in front of the entire pack causing starter Mike Karau to drop the black flag on the veteran.
Noble would refuse to leave the track and ran in traffic until a lap 44 mishap involving Jim Bruggeman of St. Paul, Minn. brought out the red flag. Officials then ordered Noble out of the race which angered the driver into stopping in front of the flagman’s stand and starting a discussion, until promoter Clayt Domack ordered a tow truck to remove the familiar white and green #75.
After a delay, Noble resumed his defiant behavior and ran at the end of the pack, this time accompanied by his son Mark.
All of this stole the show from Ed Sanger, but when the 50 laps were over with, he collected a $1,500 check and a bottle of champagne from race sponsors Floyd Albee and Jim Pearson.
Sanger’s victory also greatly overshadowed the appearance of ‘guest driver’ Dick Trickle of Wisconsin Rapids, Wis., of short track racing fame. Trickle’s newly finished Mustang just wasn’t ready and balked in both his heat and the feature.
Tom Steuding of Altoona, Wis., Sanger, Dave Bjorge of Austin, Minn., and Jim Bruggeman of St. Paul, Minn., were heat winners while Rich Olson of Rochester, Minn., won the consolation.