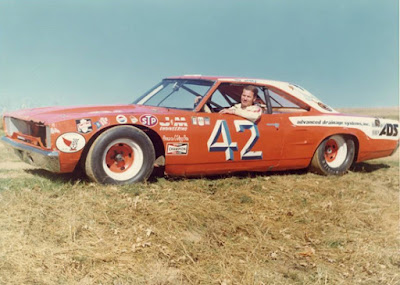 Donnellson, Iowa (July 22, 1972) – Irv Janey of Cedar Rapids, Iowa, was in championship form at the Lee County Fair on Saturday night, as he came away the winner of the 50-lap feature for IMCA new model stock cars in the time of 23 minute and 32 seconds. Janey also set fast time in qualifying, speeding around the half-mile in 27.57 seconds.
Janey encountered problems in the first heat, yet went on to win the STP trophy dash and finish second in the pursuit race. He accumulated enough points to retain and even widen his lead over Gerry Harrison of Topeka, Kan., who had a terrible night.
Gordon Blankenship of Keokuk, Iowa, continued to run well as he won the first heat and took second in the main event. He is currently in fifth place in the standings, tightly bunched within 30 points of Jim Still of Liberty, Mo., who is now in third.
Vern Mondry of Lake Elmo, Minn., finished sixth in the feature and holds down fourth place in the official IMCA point standings, only seven markers ahead of Blankenship.
Carl Vander Wal of Ames, Iowa, finished fourth in the 50-lapper and has now moved from 12th to seventh in the standings.