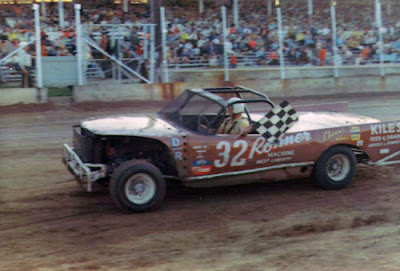 Mel Morris take a victory lap after another win.


Oskaloosa, Iowa (July 10, 1969) - Mel Morris captured the super stock mid-season championship race here at the Southern Iowa Fairgrounds track Thursday night. Morris, the current S.I.R.A point leader, won every race he entered which included the trophy dash, second heat, Australian Pursuit and the special mid-season 25-lap feature.
The West Liberty driver really staged a fine show for the “standing room only” crowd of fans. Morris had the choice of front row positions for the main, by virtue of being top in point standings. He chose the outside and it proved to be a very wise decision. Mel took command of the lead on the first lap and led all the way to take the checkered flag at the end of 30 laps.


In a bumper to bumper battle for second place was Tom Stewart of Washington, John Moss of Iowa City, Pokey West of West Chester and George Barton of Ankeny. They finished in that order followed by Dick Oldham of Des Moines, Del Stokke of Ames and Gary Redlinger of Keota.


Morris took the 5-lap trophy dash ahead of Ron Perdock of Washington, Gary Redlinger and Irvin Phillips of Oskaloosa.


Des Moines driver, Don Hoffman, wheeled his #121 into the lead on the second lap to win the first eight-lap heat race. Don managed to hold off the hard challenges of George Barton and Joel Rasmussen to take the event. Dale De France of Marshalltown was fourth.


Mel Morris was the winner of the second heat. Tom Stewart and Dick Oldham were second and third respectively. Mike Keen of Marshalltown finished fourth.


John Moss took over the first-place position from Ben Schroyer on the fifth lap to continue across the finish line for the third heat victory. Following Moss in second was Pokey West, third, Dan Clement and fourth, Arlo Becker.


Starting on the tail of the lineup for the Australian pursuit race didn’t bother Mel Morris any at all. He just up and passed the whole pack eliminating everyone but himself and won the race. Mike Keen placed second and Del Stokke placed third.
Stan Crooks came on strong in the last third of the 15-lap semi-main to grab the lead and win. Chasing Crooks past the checkers were Del Stokke, Slim Doonan of Brooklyn, Ron Perdock, Paul Uhlenberg, Gary Redlinger and Irvin Phillips.