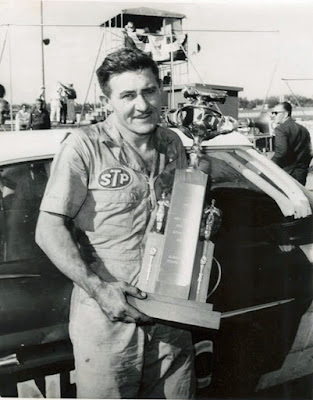 
Topeka, Kan. (July 7, 1959) – Ernie Derr threaded his way through mishaps and a bulky field on Saturday afternoon to win the 200-lap Independence Day stock car race at the Mid-America Fairgrounds.


Derr, the little veteran from Keokuk, Iowa, took the lead on the 38th lap, lost it momentarily on the 122nd lap when he stopped for gas, then grabbed it right back and held on to it the rest of the way.


Derr drove his 1957 Pontiac to a new 100-lap record while speeding to victory, and just missed the 200-lap mark by just 13 seconds. He was pushed hard the last 100 laps by another Keokuk driver, Dick Hutcherson, who also pilots a 1957 Pontiac.


The crowd of 7,500 witnessed all sorts of action during the IMCA-sanctioned endurance test over the half-mile dirt track. Four cars smacked into fences, and one spectacular skid in front of the stands saw starter Gene Van Winkle barely escape serious injury.


On the 122nd lap, a 1956 Chrysler, driven by Bruce Nystrom of Oshkosh, Wis., broke an axle while bearing down the home stretch and went out of control.


Van Winkle, stationed on the track, leaped toward the infield and was only nicked in the leg by the skidding car. The car then smashed into a light tower and started on fire as Nystrom escaped. The fire was quickly extinguished by the emergency crew.
Van Winkle, the veteran starter from Lincoln, Neb., was knocked to the ground in the mishap and came away with slightly torn trousers. He changed clothes, limped back to the track and finished flagging the race.