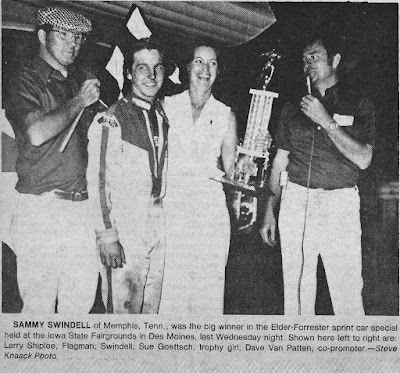 Des Moines, Iowa (July 27, 1977) – Sammy Swindell of Bartlett, Tenn., proved once again that racing talent comes in all sizes, when he galloped to victory in the 25-lap Elder-Forrester Invitational feature win at the Iowa State Fairgrounds on Wednesday night.
The diminutive 21-year-old came on like a bolt of lightning. He started in the fourth row, shot past the pack, and beat an all-star field in an impressive way.
He had such stalwarts as Doug Wolfgang of Des Moines, Ron Shuman of Tempe, Ariz., and Bobby Marshall of Dallas, Tex., all playing catch-up.
Swindell was the third leader in the race. Butch Bahr of Grand Island, Neb., led the first four laps, then local standout Doug Wolfgang took the lead going into lap 10 and that was the end of that.
Wolfgang, whose car was belching blue smoke most of the way, ran second to Swindell until lap 24, when he crashed into the wall on the first turn. He was not injured when either a tie rod or right front radius rod broke.
It was definitely a night to remember. Corn Belt Racing Inc., promotions are becoming record-breaking events. The more than 5,000 fans saw a new one-lap record fall before sunset. Rick Ferkel of Findlay, Ohio, raced around the half-mile dirt oval in 22.162 seconds, eclipsing the old mark set just four weeks ago by Ron Shuman at 22.569 seconds.
Swindell gave an early indication as to his plan of attack early in the evening when he dominated the third heat. Like a slingshot, he zipped by five cars before the first lap was even completed. He also set a new record in the heat, circling 8 laps in a scorching time of 3 minutes and 8 seconds.
Wolfgang, the golden boy of sprint car racing now a days, got his act together early in the evening by winning the trophy dash.