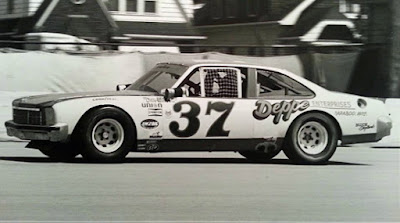 Dave Watson
Madison, Wis. (July 13, 1977) - Dave Watson has had his first taste of the big time, the good and the not so good of it.
Watson, a 31-year-old Milton resident who grew up in Beloit, has been steadily taking over as the king of the nation's stock car short tracks, a position he assumed from previous Wisconsin monarchs Tom Reffner and Dick Trickle.
Watson led the nation a year ago with 41 short track victories in 76 events entered and this season he's leading the newly formed American Speed Association standings by 250 points with 19 of the scheduled 29 races finished.
Sunday, July 10, he ran for the first time at the famed Milwaukee Mile, the asphalt oval track at State Fair Park in West Allis. All he did in his rookie appearance was whip everyone and win the USAC-sanctioned Miller 200 with drivers of the capability of Bobby Allison, who finished five seconds back in second place, Bobby Unser, Don White and Ramo Stott in his wake.
But things weren’t entirely easy for Watson. He was held up a lap in the pits as a penalty for passing cars in the backstretch under the yellow caution flag, something other drivers got away with.
Shortly after he roared past Allison on lap 158 to take the lead for good, United States Auto Club (USAC) officials had the binoculars out watching him going down the straight.
“They told us his right rear tire was chunking off and we’d have to call him in,” said one of Watson's crewmen.
Car owner Dave Deppe of Baraboo told USAC something a little to the contrary and Watson didn't even hear about the incident until after the race when he said the car felt fine.
Almost an hour after the victory, USAC officials still were combing Watson’s car for violations. Routinely, the top five finishers at Milwaukee stock car races are torn down for inspection but the perusals usually don't go beyond a quick check of the engine and gas tank.
Deppe was called in to the impound area during the inspection and was engaged in conversation with officials for over half an hour before the car finally was cleared and the change it. “The only thing is, they gave us a legal inspection sticker before we started the race that said the car was all right. But we'll change it. It’ll only make the car go faster as far as I'm concerned.”

Asked afterward what the trouble was, Deppe said, “The biggest problem was that a rookie driver and a guy that owns a garbage truck business won a race."

Deppe is president of D and D Disposal Company in Baraboo as well as road construction and crane rental businesses.
“They had some problem with some of the paneling and bodywork on the car," Deppe said, elaborating on some of the discussion. “They tell me now I've got to change it,” he said. 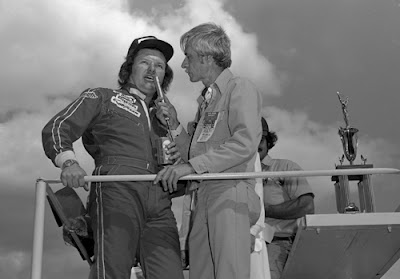 Milwaukee winner Dave Watson is interviewed by announcer Jack Baker. - Stan Kalwasinski Photo
The car, a 1977 Buick Skylark with a 350-cubic inch Chevrolet engine from Prototype Engineering of Wheeling, Ill., carried Watson over the threshold into the world of big league stock car racing. He and Deppe are planning to run all the USAC stock car races on asphalt continuing with Sunday's 200 miler at Michigan International Speedway.
Watson displayed patience and intelligence, both on and off the track. Neither of these qualities will hurt him as a race driver. A perfect example of his patience is the way he waited for the right opportunity to run at Milwaukee.
“It’s been three years since I really thought I was geared up and could run here,” Watson said in his post-race interview Sunday. “I felt I was capable of driving with this kind of competition but three years ago, I didn't have the equipment.”
And there were other reasons, which almost forced the move at this time.
“I'd kind of reached a plateau in short track racing,” he declared. "We won everything there was to win in short track racing. We won 41 features last year. We couldn't go anywhere else but down."

He showed patience, too, when, midway through the race, at the first of two crucial yellow flags which he needed to erase his penalty lap, he calmly waited a couple of laps to shoot into the pits for refueling.

“We wanted the pace to settle down,” he said, explaining his delay. “We wanted everybody to get their position established. Sometimes the pace car doesn't get out there and pick up the leader right away and a long race like this can be pretty tedious on the scorers. So sometimes it's to your advantage to wait until everything is settled down and your position is established.
Finally, he is not awed by such stock car legends as Allison. He has raced Allison before on the short tracks and, though he doesn't speak of him with any lack of respect, he speaks of him as an equal.