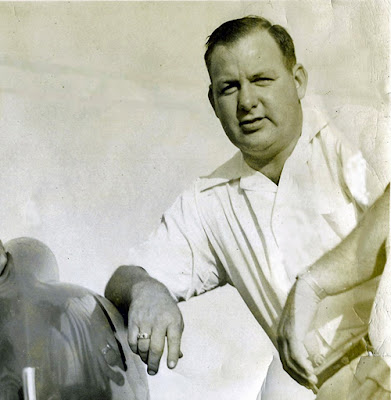 
A rather heavy track with long chutes and tight turns presented just about every problem in the book for the field as they rode wide, low, and in the middle, looking for that groove that would give them their money’s worth.


Canny Buzz Barton grabbed the lead on the second lap as he dove below Pete Folse in turn one and then stood off the challenges by Folse, Jack Rounds and Arnie Knepper to romp in the big winner.


Veteran IMCA drivers found a new threat in Parnelli Jones of Torrance, Calif., with this Chevrolet sprinter. Though the track was heavy, Jones managed to stay with the front-runners until a spinout on the 10th lap of the feature.


Promoter Frank Winkley stated that it was as sharp a field of big car drivers that he had ever seen in action on one track. “The large number of Californians in the lineup added color and speed,” Winkley was quoted.