1960 - From Jalopies to Stock Car Title is Nelson’s Goal 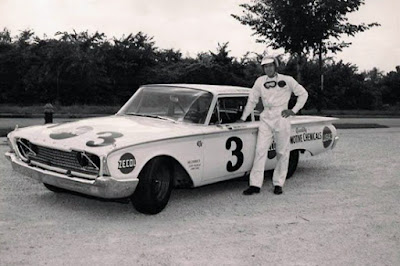 (July 20, 1960) – It all started at Pleasant Prairie – not too far from Racine – where some energetic sportsmen had constructed a race track.


What an afternoon it was…rain, rain and even more rain. The track was nothing short of a quagmire made even worse because the base for the track was a swamp.


This was where Norm Nelson, born started his racing career.


A career which could see him clinch his first career United States Auto Club late model stock car title. He could claim that crown this Sunday with a stellar performance in the 250-miler at .


It would be “according to script” to say that Nelson won that first jalopy race but he didn’t. In fact, his jalopy got bogged down and stuck in the mud on the main straightaway much to the amusement of the crowd.


Norm “stuck” with the jalopies that first year but during the winter indoor season of 1940-41, he turned to midget racing. In fact, he experienced a great deal of success in that winter. He would continue to pilot midget cars through 1951.


“But the racing bug really hit me by then,” Nelson would point out. “I couldn’t get enough driving if I stayed with midgets, so I started driving late model stock cars in 1948.”


That year Nelson “invaded” in for his first late model stock car race and he faired pretty well, finishing fourth. He would remain a fixture there. “I would rather drive at State Fair than any other track,” Nelson declared.


He would also turn to hot rods in 1949 and competed on State Fair’s quarter-mile track. Some three years later, hot rods would become a thing of the past and modified stocks would usher in a new era.


His best previous season was a second place finish in 1950.


Going into the final race of that season, Nelson held slim lead over Jay Frank for the title. In fact, the lead looked substantial; the only way Franks could beat him was to win the final race at , and Nelson on the sidelines. That’s just what happened; Nelson experienced mechanical issues before the green waved and Franks would score the victory, winning the title by 30 points over Nelson.


To finish second is a tremendous achievement but it was discouraging for Norm to be beaten out in the season’s final race because of mechanical failure.


Nelson remained optimistic and churned ahead…


In 1957 and ’58, Nelson would finish third nationally in late model stock cars. It looked like he was on his way again. But then came the disastrous year of 1959. He would have only one finish in eight attempts.


As the ‘60 season approached, Nelson, who always fielded his own race cars, was approached by Bill Trainor of Zecol-Lubaid Products of Milwaukee. Trainor “talked” Nelson into driving his 1960 factory-loaded Ford, an offer Nelson couldn’t refuse. It proved to be a wise decision.


He has piled up a total of 1,360 points, benefitted by victories at and , not to mention several runner-up finishes so far this season. Nelson also won a Midwest Auto Racing Club event at . Although MARC and USAC worked together this season, the first place finish didn’t add to his totals.


He has scored more than 6,000 national championship points in and ranks sixth in the all-time rankings. In 37 late model stock car races, he has earned more than $27,000.


What race furnished the biggest thrill for Nelson?


“Certainly, my wins at State Park and Du Quoin this season rank right up there but my biggest thrill came at State Fair in 1955 when I came through with a victory and then blew a tire some 200 feet later. I slammed into the south wall and demolished my car. That was a close one.”