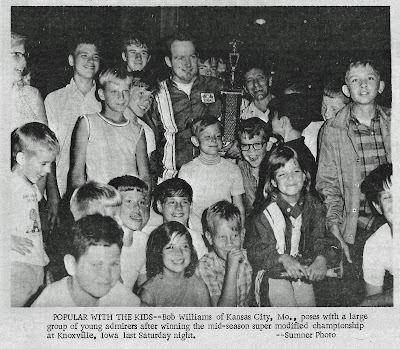 Knoxville, Iowa (July 19, 1969) – After a month’s absence from the super modified circuit, Bob Williams of Independence, Mo., returned to racing on Saturday night and did it in the Williams’ tradition.
From the outside of the front row, Williams jumped into the lead in the 25-lap feature and won going away with the rest of the field scattered throughout the lapped traffic.
The victory was Williams’ fourth of the year, was worth $600 and earned him the super-modified mid-season title at the Marion County Fairgrounds half-mile track.
A crowd of well over 5,000 race fans enjoyed watching Williams and Earl Wagner of Pleasantville, Iowa, duel side-by-side for the first 15 circuits before Williams opened daylight and Wagner got tied up in lapped traffic.
Williams would cruise to the easy win while Wagner would settle for second. Dick Sutcliffe of Kansas City, Joe Saldana of Lincoln, Neb., and Ray Lee Goodwin, also from Kansas City, would round out the top five.
Only one accident marred the feature when Eddie Leavitt of Kearney, Mo., would tag the turn three wall but he was unhurt.
Joe Saldana turned quick time during qualifying with a 22.43 second showing on the half-mile.
Earl Wagner would win the trophy dash, while heat winners were Ray Lee Goodwin, Earl Wagner and Eddie Leavitt. Ron Jackson of Burlington, Iowa, would win the consolation.
It was the first night of super-modified racing at Knoxville in three weeks because of the recent string of bad weather.