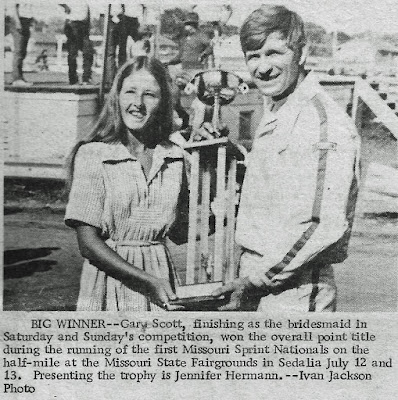 Sedalia, Mo. (July 12-13, 1975) – Gary Scott of Holts Summit, Mo., was the bride’s maid in both evenings of competition at Sedalia’s Missouri Sprint Nationals, but won the overall point title for his consistency.
It was Cliff Woodward of Kearney, Mo., and Larry Clark of Tolleson, Ariz., who each took home the $1,000 first place money after splitting the 20-lap features.
Woodward would out-distance a 26-car field on Saturday night after starting on the outside of the front row on the dry slick flat half-mile dirt oval. Woodward would lead green to checkered with Scott not far behind in second place.
Clark would start on the pole for the Sunday afternoon matinee and like Woodward, lead start to finish with Scott again claiming runner-up honors.
Fifty-eight cars timed in on Saturday night with Bubby Jones of Danville, Ill., setting fast time with a 24.20 second clocking.
Besting a field of 60 cars on Sunday afternoon, Edd French of El Paso, Tex., and Ralph Blackett of Des Moines would share identical times of 24.23 seconds.