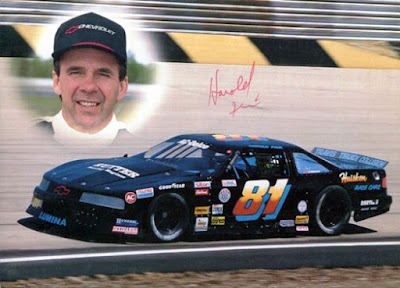 
Anderson, Ind. (August 25, 1990) - Harold Fair has an excellent memory for the disasters that have happened in his career.
The Detroit native may have trouble remembering what happened Saturday in the 24th running of the Anderson 400... He won.


Fair, who started 19th in the 24-car field, held off Scott Hansen and Bob Senneker over the last 50 laps to capture his first win on the American Speed Association circuit in over a year.


Fair made the field by virtue of a third-place finish in Friday's last-chance race for non-qualifiers.


He immediately recalled the last time that he had not qualified, "Cincinnati, three years ago." His answer for how long it had been since he won an ASA race ... "last June at Berlin (Marne, Mich.)."


The win was worth $6,000 for Fair in the inaugural AC-Delco Challenge series. And just as importantly, it kept him in the running for the first North American Challenge Cup awarded to the ASA point’s winner.


Fair broke a header with 70 laps to go; leaving him with only five of his engine's original six cylinders. With the hard-charging Senneker and Hansen close behind, thoughts of a memorable breakdown crossed his mind.


But Fair used the advantage the Anderson Speedway track offered.


The track is narrow, making passing difficult. Fair wasn't about to pull over and let Senneker and Hansen by.


"My crew told me that the only way anyone was going to pass me was if they went three rows up in the grandstands," said an elated Fair. "They stayed up until two o'clock in the morning to get the car right. I knew it was fast, but I didn't know it would be that fast."


Senneker, who had to fight a collapsed right-front spring, still had enough power to begin reeling in Fair over the last 100 laps.


Senneker made contact with the rear of Fair's Chevrolet Lumina, causing a flat tire which took the current points leader out of contention.


Then it was Hansen's turn to challenge. For the next 20 laps, Hansen tried every measure he could find to get around Fair. But Fair used as much track as possible to hold off the Green Bay native.


"It was a fun race," said Hansen, who remained second in the point’s race. "But I can't blame


Harold. He did what he had to do. I would've done the same thing. My car was running real fast but I burned up my tires trying to catch him."


Another Wisconsin product, Richie Bickle of Edgerton, survived one disaster after another to finish third, one lap down. Bickle ran the last half of the race with his left-front fender gone and then finished the race without brakes.