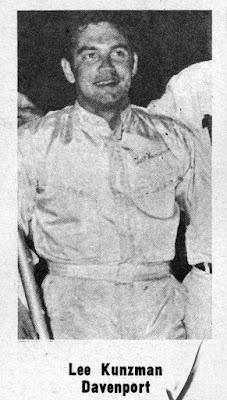 
It would prove to be a great night of racing as Kunzman fought off repeated challenges from Bob Tattersall and Merle Bettenhausen to score the victory. The three leaders fought for position nearly the entire distance.


Bob Wente led the first four laps before being passed by Tattersall. Tattersall was driving the Lithgow Offy after losing oil pressure on his own Honker II earlier in the evening’s program.


Tattersall led until lap 36 when Kunzman slipped by for the top spot. Kunzman stood on the gas from that point and sailed on to his second straight victory at the track. Bettenhausen would get by Tattersall with two laps left to claim second spot. Wente would drive to a smooth race to seal a fourth place finish and Chuck Weyant would earn fifth.


Sixth spot was a tremendous battle between four cars. Dave Strickland would take the sixth spot over Larry Rice, Bill Renshaw and Hank Butcher in a fantastic performance.


Les Scott, behind the wheel of his own Offy, came up with quick time in qualifying, speeding around the quarter-mile in 15.23 seconds. Kunzman set a new three-lap record in the trophy dash as he won over Don Vogler, Johnnie Anderson and Scott in 46.66 seconds.