1974 – Merryfield wins on spin by Hoffman 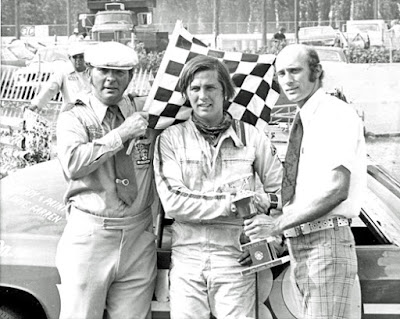 Joe Merryfield of Des Moines, Iowa, won the IMCA Stock Car feature at the Iowa State Fairgrounds in Des Moines, Iowa, on August 18, 1974. Presenting the checkers is flagman Larry Shipley and Merryfield is being congratulated by IMCA secretary Lyle Kreps. — AMR Photo
(August 18, 1974) - Joe Merryfield of drove inside a spinning Don Hoffman in the first turn of the last lap to capture the $750 top prize in the International Motor Contest Association’s sanctioned featured auto races Sunday afternoon at the Iowa State Fair.
Hoffman, also of , who had taken over the lead on the fourteenth lap of the 50-lap feature, drove high into the loose dirt and lost control of his car.
Merryfield maneuvered his 1972 around Hoffman to take the checkered flag after the two had staged a two-man battle the last 18 laps.
“I never touched him,” said an exhausted Merryfield, referring to an earlier incident when he apparently bumped Hoffman’s 1972 Nova.
“He went into the turn too hard and lost it. I darn near tore his bumper off before, but I didn’t touch him the last time.”
Hoffman, who recorded the fastest qualifying time of 25.99 seconds, recovered from the spin to take fifth place.
Another driver, Bill Rice, pushed his 1973 Camaro to a second-place finish, collecting $550. It was Rice's first IMCA race and he also collected a victory in the first heat for an additional $75 in prize money.
Merryfield, who started in the eighth row of the 31-car feature, worked his way to third place by the thirteenth lap and at the halfway point was second, trailing the leader Hoffman by 30 yards.
Merryfield later cut that lead to a car-length setting up the final 18-lap battle.
IMCA 1973 rookie of the year, Ferris Collier of , finished third, in a ’69 Chevelle. Bob Hilmer of Dysart finished fourth and Gary Lindgren of took sixth.
Hoffman, who won the late model feature Saturday night, also captured the consolation. Bob Kosiski of , finished second.
Results –
First Heat: Bill Rice,
Second Heat: Bill Myers,
Trophy Dash: Gordon Blankenship, Keokuk
Consolation: Don Hoffman,
Feature: