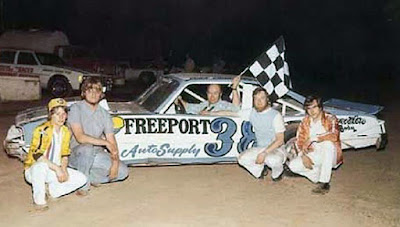 John Connolly - Photo courtesy of Al Lewis/History of Illinois Short Track Racing
(August 7, 1977) - Sunday night at Freeport Raceway was an evening in which the cars having technical problems seemed to be nearly as numerous as the automobiles that were in good working condition.


This aspect of racing was present in the 30-lap feature race, and John Connolly, in the right place at the right time, knew enough to take advantage of it.


Connolly overtook Darrell Dake of , who had been the leader since the beginning of the race, when Dake's car developed engine trouble with fewer than 10 laps to go. With smoke pouring from his car on each turn, Dake's gallant effort to hold of his competition failed, and Connolly became the winner.


Connolly, of , was the winner of the feature race two weeks ago and also captured the mid-season championship here. During the middle of Sunday's feature, he was situated in fourth place. Around the 20th lap, second-place driver Mike Niffenegger ran into the wall, becoming just one of the many cars which necessarily left the track during the evening's competition.


With about five laps to go, Connolly overcame Ray Guss to move into the second spot. With Dake's machine steadily failing him, Connolly moved into the lead with just several laps to go around the half-mile dirt track and roared to the win. Dake finished fourth behind Guss and Duane Steffe.


"I don't know if I could have caught him (Dake) or not without his trouble," acknowledged Connolly after the evening's slate of racing had been finished. "I think we were both running as hard as each other. I was gaining on him, but he might have been taking it easy, and not abusing his car, because he had a good lead. You just never know what might have happened."


What did happen, however, was that Connolly, in fourth place before Sunday in the point standings, undoubtedly improved his position. He was behind Jim Strube, Steffe and Dake in the point totals. Strube, in first place by 13 points and winner of last week's feature, had to take his car into the infield after only five laps because of car trouble.


There was a different winner in each of the categories of action Sunday. Whitey Harris of Villa Park captured the time trials for the second straight week, improving to a 25.32 for one lap around the track. Guss, of , won the trophy dash, 's Terry Pfeiffer won the first heat race, Dave Hutmacher of took the second heat, Steffe won the third heat and Wayne Schumaker of was victorious in the semi-feature.