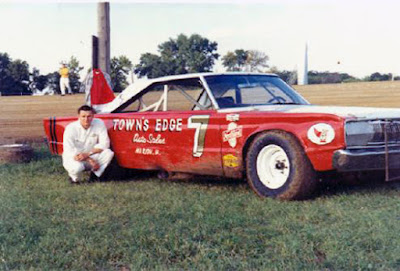 Verlin Eaker
(August 9, 1968) – Late model drivers, the International Motor Contest Association is out to win you over this year. And the beat goes on ... and the beat goes on.
That friends, may not appear too funny to Verlin Eaker of and especially his car owner, Larry Ryan. Ryan is grossly disturbed to say the least, over IMCA’s ruling Tuesday that drivers must choose between regional and national circuit races for the remainder of the season.
According to Secretary Bill Hitz of the rule is effective immediately.
Eaker is probably the driver most seriously penalized by the action. He's fifth in national point standings and is the regional point leader at and .
Verlin chauffeurs a 1967 Dodge in national meets and on the half-mile track, but he handles a ‘65 Dodge on the quarter-mile at .
“The guy that’s really hurting, is me,” moaned Ryan. “I've got $15,000 worth of equipment in the '67 Dodge.” In the last two weeks Ryan has put $3,600 in the car, including a spanking new $2,400 engine.
“I'd like to go full-time on the national circuit,” added Ryan, “but all my guys can't get away. They have fulltime jobs; they don't have financial help from the factory like a couple other guys do.”
“We can race on the weekends but not on the other days. We got into the national circuit with the understanding we'd run the events close to home. My point is if you're going to race, go PREPARED to race. If other cars can't compete, then they shouldn't show up.”
“I've put a lot of money in this car and now what have I got? There's no point in having a car if you can't run it. I'm thinking about selling the car - in fact, it's now for sale!”
“This is the last year I'll support racing. IMCA is going to kill racing.”
Whew! Does the beat really go on?
The latest development by IMCA came about because regional drivers have objected to Ernie Derr and Ramo Stott, both of Keokuk, racing in regional competition. Derr and Stott are the top drivers on the national circuit. Derr and Stott were also part of the national group, which refused to race in on the Twin 50’s program with regional drivers. And the feud goes on…
“We (the board members) felt we had to do something so we wouldn't run into any strikes or boycotts during our fair dates,” said Hitz.
“Now the drivers will have to go one way or the other. We had to draw the line some place, as we had complaints coming from both groups. We didn't anticipate this early in the season.”
Hitz said it was not the intention of IMCA to restrict regional drivers from trying their luck on the national circuit.
“Before this all happened, temporary permits good for one race were available for use on the national circuit,” he said. “Now a driver has no choice. He must pick his circuit. Yes, there will be more discussion on the matter after the season ends.”
Eaker must now make his decision. There are six regular Friday night dates left to race in and about eight at , the other regional track where he races. But the national circuit has about 25 dates remaining.
Verlin does not drive for Ryan at Cedar Rapids., but he indicated Thursday he would prefer finishing the year on the national tour.
“Larry says no,” said Eaker, “so I really don't know what is going to happen."
Assuming Ryan stands pat on his decision; we can expect to see Eaker defending his point lead over Red Droste and Roger Dolan at Hawkeye Downs in on Friday night
And the beat goes on…