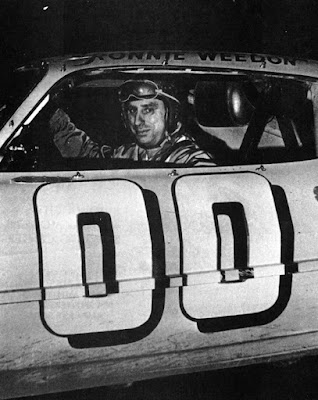 Ron Weedon
West Liberty, Iowa (August 15, 1973) - Open competition racing was held at the Muscatine County Fairgrounds half-mile dirt oval on Wednesday and a large crowd of fans saw Ron Weedon of Pleasant Valley capture the checkered flag for the feature event.
Weedon earned $600 for winning the 25-lap event.
Four cars sailed bumper to bumper almost the entire race, but Weedon kept his auto in front to take the checkered flag. Ron Hemsted of Lone Tree, who started on the pole for the feature event, held the lead for a couple of laps, then stayed on Weedon's tail until the 12th lap when the engine gave way.


Mel Morris of West Liberty, who had been in contention all the way, then took over the second place spot and finished there when the flag was dropped. Bill Newman of Muscatine was third, while Earl Tice of Ames and Don Moran of Muscatine rounded out the top five finishers.


John Connolly of Delhi started the evening's events by taking the trophy for the five-lap trophy dash. Mike Niffenegger of Kalona had his car back together from Saturday evening, and charged past Morris to take the first heat.


Ron Hemsted of Lone Tree held off rest of the hard-charging drivers to take the second heat. Earl Tice of Ames waited until the third turn of the final lap of the third heat to take the lead away from Don Morgan and came across for the checkered flag. Tom Hearst of Muscatine captured the semi-main event.