1974 - Stott Bounces in First at Sedalia 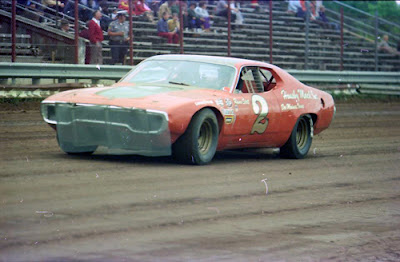 Ramo Stott - Sal Picalo Photo
(August 24, 1974) - It was rougher than a washboard but not quite as rough as a plowed field as Ramo Stott of Keokuk, Iowa, drove to victory in a 100-mile United States Auto Club late model stock car race on the one-mile dirt oval at the Missouri State Fairgrounds.


A crowd of more than 6,000 was on hand as Stott, driving in 1972 Plymouth, took the lead for keeps 14 miles from the finish from Ernie Derr and went on to beat his fellow townsman by about a city block.


This was also a carbon copy of the USAC stock-car race here in April of 1973, when Stott edged Derr. But on that one Stott took the lead with only two laps to go.


Larry (Butch) Hartman of South Zanesville, Ohio, the USAC stock-car champion, had the best mark in the time trials, guiding a 1973 Dodge around the track in 39.8 seconds.


This put Hartman on the pole and he led the first 13 laps. Stott quickly moved up from his sixth starting position and took the lead by going low on Hartman between the number one and number two turns and pulling away on the backstretch.


On lap 17 Hartman ducked into the pits with a broken accelerator cable. He was filed last down when he returned to the track and was not a factor in the finish. He was credited with seventh place.


Janey, the second-fastest qualifier, then tucked himself behind Stott, and on the 43rd lap used the identical tactic between turns one and two to take the lead.


Janey stopped for fuel on lap 60 and Stott regained the lead. On the next lap the left rear tire blew out on Janey's car, and after another pit stop, he was one lap behind.


Derr, biding his time, shot into the lead on lap 76 when Stott pitted for fuel and two new right side tires. Derr had made a pit stop earlier for fuel and never lost a position.


The only yellow flag during the race occurred on the 74th lap when the driveshaft system fell out of a 1974 Dodge driven by Jigger Sirois of Hammond, Ind. Only six laps were run under the caution flag.


Stott hugged the bumper of Derr from the 76 lap on. And he dipped underneath Derr in turn three on the 85th lap, came out in front and took it from there.


“I'm just glad the car held together,” Stott said of his rough ride. “I guess the track was not as rough in the turns as it was last year, but it sure shook hard on the straightaways.”


“I just thought I could get around him (Derr),” Stott continued, “and when I did I just sat in it and sailed.”


Stott said the tires he had put on late in the race seemed to hold to the track better.


Derr, who now has finished second in five USAC dirt races this year, drove with a handicap when the windshield dropped out. The glass was held in the car simply because it fell back onto the rear view mirror.


“Rocks just kept hitting it,” Derr said afterwards. “The track got awfully rough. But at the end Ramo was just running faster.”


“At track could break and anvil,” said Hartman, as he again failed to land a high finishing position here. “I think the track just shook everything out of the car.” The windshield was broken on Hartman's car, too.


Nelson, the current USAC point leader, and like Hartman, a three-time champion, was more than satisfied with his fourth-place finish.


“When I saw that Butch was in trouble early I made up my mind to finish the race and get the points.” Nelson went into the race with a 50 point lead over Hartman. Nelson added 160 while Hartman collected under 130.


Nelson continued on the driving of Stott. “The way Ramo drove you either win the race or you don't finish.”