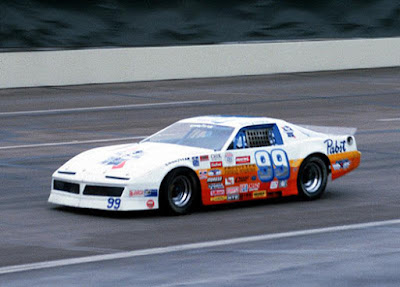 Dick Trickle
(August 26, 1984) - Dick Trickle had a lot on his mind during the final 70 laps of the Milwaukee Sentinel 200-mile stock car race Sunday afternoon at State Fair Park.


After taking the lead on lap 130 of the 200-lap race, Trickle was not thinking victory as much as he was about just finishing the American Speed Association (ASA) race. You see, that has been a big problem of his during ASA competition.


It wasn’t a problem this time though; as the veteran stock driver held on to win the ASA-sanctioned race with an average speed of 96.997 mph. It was his fourth victory at , but only his second in ASA this season.


“We’ve been competitive (in ASA), but we haven't been able to finish a lot of races. We’ve had a lot of little things go wrong with the car. Toward the end of the race, I was thinking more about what could go wrong than winning.”


Nothing went wrong. In fact, Trickle’s victory netted him more than he had anticipated, because he and Bobby Allison were declared co-winners of the Milwaukee Championship.


Alan Kulwicki of held the lead going into Sunday's race, with 790 points - 40 more than Allison, the defending NASCAR champion.


All Kulwicki needed was a high finish to win the Triple Crown, but he was forced out of the race on lap 70 with engine trouble.


“I really didn't think I had a chance at it,” Trickle said. “I didn’t do well in the Miller 200, so I felt my chances were not very good. It’s nice to win the extra money.”


Trickle then added with a half smile, “I had the best finish today, so I should get the whole thing.”


Trickle definitely finished better than Bobby Allison (ninth) and the rest of the 40-car field that began the 16th race on the 20-race ASA circuit.


Harold Fair of , finished .8 seconds behind pole-sitter Trickle. Fair drove a Firebird also and earned $6,575 in second-place money. Bob Senneker of , was third.


Jim Sauter of Necedah, the ASA point leader, was sixth and was never a serious challenger.


Ken Lund of had the best finish among rookies, taking eighth despite transmission problems late in the race. Jay Sauter, another rookie, finished 10th in a race that had seven caution flags and 12 lead changes among seven drivers.


That first lead change belonged to Kulwicki, who started in the second row and passed Trickle after the first lap. He held it until Martin passed him on lap 20. Kulwicki regained the lead after most of the leaders stopped at the pits on a yellow that came out on lap 49; but, 20 laps later he was knocked out of the race with engine trouble. Several drivers held the lead after that point, with Trickle taking over for good on lap 130.


Trickle pitted on lap 75 and again on 120, both times for fuel and tires. After the second stop, the resident had little trouble overtaking Mike Eddy for the lead.


“I was driving very conservatively at the end,” Trickle said. “Once I got the lead, I just kept a comfortable distance. I just wanted to win the race; I didn’t care by how much.”


“You have to give my crew a lot of credit. They changed all four tires both times and we still beat our competitors out.”


According to Trickle, his victory is a sign of what to expect in the remaining weeks of the racing season.


“I think we're going to finish strong,” he said. “I'm looking forward to the remaining ASA races. We should do well.”