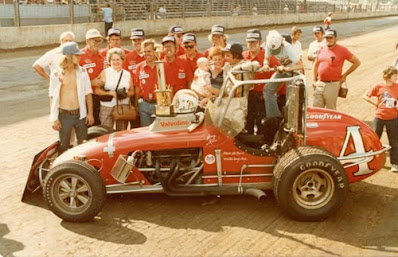 Larry Rice is joined by family and crew after winning the Tony Bettenhausen 100.

Rice, 31, of Indianapolis, started in seventh position, grabbed the lead by the eighth lap, and at one point was a full 15 seconds ahead of the pack.

But a yellow flag on the 68th lap when another car burned out an engine narrowed that to eight seconds and finally to only a few car lengths.

But when the green was up again, Rice's red dirt car was able to pull away and he was never seriously challenged for the lead.

"Every time the yellow flag came out and we had to close up, we just seemed able to pull away at will," said Rice, as he got a winner's kiss from his wife, Beverly.

Rice said that once he was ahead "the only problem was to keep my concentration and not make a mistake."

Sheldon Kinser, of Bloomington, Ind., finished second, taking over the spot when Ralph Parkinson Jr. of Kansas City, Mo., stalled in the 89th lap after running among the leaders for much of the race.

Failing to qualify for the race was Billy Cassella, of Weirton, W.Va., last year's USAC dirt car champion. He finished 25th among the qualifiers, just one below the number needed to make the race.

Gary Bettenhausen, son of the man after whom the race is named, flipped over during the first turn during qualifications but was not hurt.