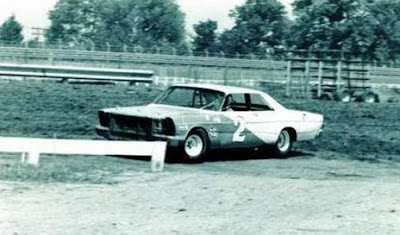 
Austin, a pit member of the Lenny Funk racing team, thought it would be a good idea to give a little racing exposure from the inside of the track – from the pits.


The event was the 100-mile International Motor Contest Association (IMCA) late model stock car race on the one-mile track at the state fairgrounds. The honorary job included getting a white, trimmed in orange, shirt – the same colors as Funk’s 1967 model Ford racer.


As the afternoon wore on, the job became a little less honorary and quite a bit more tense. Funk, it seems, overcame IMCA’s fabled racing pair of Ernie Derr and Ramo Stott and captured first place in the $1,000 portion of the $5,000 purse that went with it.


After meeting , the rest of the pit crew assembled around the car. Dick Witt of , is the mechanic and pretty much the main man inside the rail. Others are John Boorman of Elm, , Lowell Smith of Bates City, Mo., Gary Garrett of , and Steve Snider of .


Early tension centered on the time trials, the greatest concern was over Derr, Stott, Lewis Taylor of , and Ole Brua of Albert Lea, Minn. the concern was normal and predictable. Brua had the fastest time; Derr was second. The man of the hour – Funk – had the fifth fastest time.


Because of the IMCA inverted start, the fastest six drivers exchanged places in this put Lenny on the front row outside. Taylor, the sixth fastest qualifier, had the pole.


With a few moments to kill, decided it was time to hand out jobs. One man on each tire, a man to wipe the windshield, a gasoline man in all down the line. gave the pit crew novice the job of taking off the fuel cap and then handing Lenny a cup of water during pit stops.


Nerves tightened. A few practiced twist at the trying to replace it quickly and realizing the importance of time in the pits. The practice twist became harder and harder.


Witt, a gentleman, volunteered that the two jobs were too much for one man. The novice became the water boy. But the instructions were explicit. Give Lenny water out of the job without ice. It seemed easy enough.


The race started and quickly the orange and white racer took the lead.


Derr, in his Dodge Charger, roared from his third row starting spot and was in front on the third lap. Stott passed Funk on the fifth lap and the Keokuk, , pair were off and going in another typical performance.


The novice in the pits was content with third. The regulars stood firm. And Lenny, at age 39 and an 11 year veteran of the racing wars, was the firmest of all.


First, Stott took an early pit stop on lap 13. He stayed in for his mandatory 30 seconds, and then he stalled his engine.


Not only did Stott's pit crew jump out push but everyone in Funk's pit crew – except one – went over the rail to help.


Derr pitted a lap later and all of sudden the right man was back in the lead. There was confusion for some time over the lead, but it settled down that Lenny had it in Derr was chasing.


Lenny came in fast. It appeared it was a trial run. It wasn't. The racer braked quickly.


Over the wall when the novice – spilling just half a cup. Lenny's hand quivered taking it. Two of us were nervous. He didn't say thanks, but he liked it.


Next plans called for fuel at about the 60th lap. The novice wandered around. The regulars stayed put. On lap 49 a yellow flag came out and Funk was in the pits like a flash. The regulars were ready, the novice ran around, got the job, only had time to fill half a cup, went over the rail, one quick step in Funk was gone.


Now, lap after lap someone came by and pointed, “Your man's out there on a Sunday afternoon drive.” My man, Lenny, was doing great. He led Derr by 19 seconds and was pulling away.


With believed on lap 63 that Lenny had enough fuel; lap 64 and it was hot in the sun.


Bingo! On lap 70 a car spins. Yellow flag; by lap 75 they’re running again but Derr is only 8 seconds behind. The novice sees the handwriting on the wall.


Well, second is better than nothing.


The regulars see it differently. They realize Lenny has been turning faster laps than Derr all day.


Over the loudspeaker you hear; “Lenny Funk still has a good lead – about one third of a lap on Ernie Derr.”


Witt scribbles on the chalkboard big letters. They spell “GO”. Funk comes around, sees the sign, nods and does.


Now there are only 14 laps left. We’re counting the other way, it's the countdown.


Another spin. Another yellow, by now the regulars know that it’s Lenny Funk day in . steps over the rail and motions his driver onward. He stayed on the track and for good measure gives a slowdown signal to Derr. Derr only watches his own pit, he keeps going fast.


With five laps to go, Witt makes it official. He goes over the rail and signals Lenny to slow down. Lenny acknowledges the signal, but doesn't.


With four laps Lenny whizzes by. Then three, two, one (the white flag) and then the checkered flag.


The regulars handle the water at the finish line. There is nothing to the racing game if you're an addict.