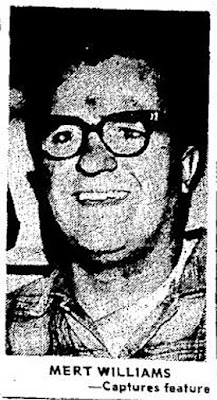 (August 12, 1962) - A bit of racing news was produced at the North Iowa Fair stock car races Sunday night. Ernie Derr, the 4-time IMCA stock car champion, did not win the 100-lap feature. Neither did Ramo Stott nor Dick Hutcherson, the other members of the “big three” from Keokuk who have dominated the point standings for several years.

The champ of the feature race of the day's doubleheader was Mert Williams, 28, of , a five-year vet on the circuit who does well but not enough to dent the monopoly held by the Keokuk trio.
Derr is the guy who generally wins at . He was the winner in a 25-lap sprint affair in the afternoon. In the evening, he won a 10-1ap preliminary race. That was for a 10-lap track record of 4:43.25 to snap a mark he had set a year ago. And Stott, in the afternoon, had set a time trials mark of 28.15 seconds for the half-mile oval.
Stott led the feature until the 36th lap at night under the lights when mechanical failure forced him from the race. Chub Liebe, another topnotch pilot, also went out. That left Derr alone - almost - with the lead and Williams close behind.
On the 94th lap, Derr had differential trouble. He finished out at a slow pace for fifth place and Williams raced to the win in his 1962 , the same type car driven by Derr. Gil Haugen of in a 1961 was second and Eddie O’ , the champ from in a 1962 Ford, was third.
Four times the yellow slow down flag was dropped (cars hold positions, but cut down speeds) for various mishaps. One was when John Mickey of Columbus Junction went through the west fence into the cornfield with only 15 laps to go in the race.
There were 23 drivers in the late model stock races to start the afternoon. By the time the feature race had finished at night, only nine automobiles still were running. Gary Sheldon escaped serious injury in the warm up at night when his 1961 Ford was demolished in an-end over-end flip on the west turn of the track.
Results –
1.     Mert Williams,
2.     Gil Haugen,
3.     Eddie Harrow,
4.     Jerry McCredie,
5.     Ernie Derr,
6.     Dick Johnson,
7.     Billy Moyer,
8.     Ed Birkey,
9.     Bill Stokke,
10.  Darrell Dake,