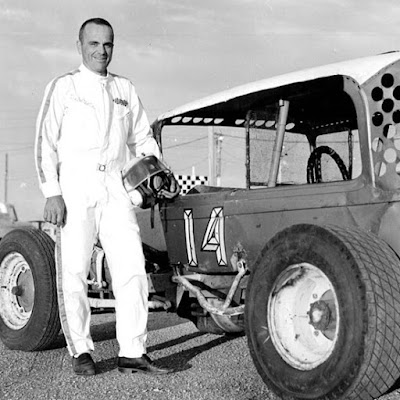 Les Wildin - Photo courtesy of Kossuth County Racing Hall of Fame
Algona, Iowa (August 2, 1963) - Les Wildin, who during the early weeks of the present season trailed Leo Christensen by a wide margin in point standings, grabbed a pair of firsts, including the feature, to become the new season point leader during the semi-modified and hobby stock car races before a huge crowd here Friday night. At least 3,000 persons saw the exciting program - and the top purse of the year, $1,300 was paid to drivers.


There were plenty of spectacular mishaps Friday. Fortunately, the worst turned out fine. The car driven by Gene Brower rolled and flipped on end in the north turn during the third heat of modified races and caught fire just before the driver scampered to safety.


The fire was immediately extinguished without causing much damage. The flip, however, put the car out of action for the night - the third straight week it has been sidelined. Several hobbies were beat up during the night and during the feature, at least three cars, including the vehicle driven by Gene Schattschneider, which was running well and heading for the front of the pack, were damaged. Gene’s right front wheel was chopped off by another car and forced out.


Wildin worked his way up rapidly from a seventh place start and took a lead which he maintained through two re-starts, despite a terrific challenge through the 15 laps by Christensen. They were closer than the first and second of the month through the last half of the race and about a car length apart when the checkered flag dropped.


In a special, once a year event, Wayne Meyer outlasted five other cars to grab a special $50 purse in a demolition derby. Most of the cars entered were shot beyond recognition when the event ended. Meyer’s car was still able to run and move around (slowly) after the others were finished.