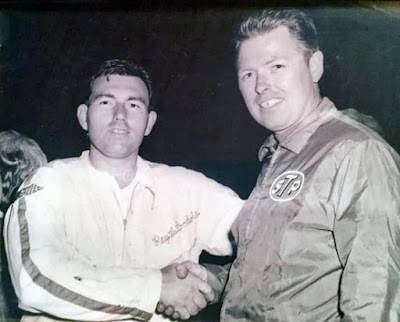 1968 Knoxville champ Ray Lee Goodwin receives congratulations from '63 winner Greg Weld.
Knoxville, Iowa (August 10, 1968) – Hard-driving Ray Lee Goodwin of Kansas City, Mo., got a head start on the field and never let up in winning the eighth annual National Super Modified Championships here at the Marion County Fairgrounds on Saturday night.
The 28-year-old veteran held the pole position with his fast time of 21.26 seconds on the semi-banked half-mile dirt oval set on Thursday night.
He yielded his lofty spot only on the first lap when Earl Wagner of Pleasantville, Iowa, managed to sprint ahead – but not for long. Goodwin regained the top spot at the start of lap #2 and was never headed again.
The victory earned Goodwin a first prize check of $3,000 plus an additional $290 in lap money. The total purse for the three night was $20,000.
Wagner, experiencing steering and handling problems, could do no better than third. Veteran Galesburg, Illinois, pilot Jerry Blundy moved steadily through the pack to grab runner-up honors and $2,000 in purse money.
Lloyd Beckman of Lincoln, Neb., gave Goodwin his only serious threat after Wagner’s but Beckman’s car threw a rod forcing him into the pits on lap 20.
Defending champion Thad Dosher of Topeka, Kan., came in 21st place in the 22-car field.
Ken Gritz of Lincoln, Neb., won the “B” Main worth $500 to the winner. The consolation was won by Don Hewitt of Troy, Ohio.
More than 15,000 race fans watched the three-day event.