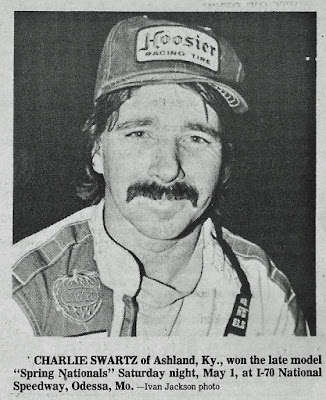 Odessa, Mo. (May 1, 1982) – Charlie Swartz of Ashland, Ohio, captured the 40-lap ‘Spring Late Model Nationals’ on Saturday night at I-70 National Speedway.
Swartz held off Joe Kosiski of Omaha to record the win, while Dave Bjorge of Austin, Minn., drove to a third-place finish, despite the fact that a previous racing accident had removed the driver’s side body work from his car.
Saturday’s heat wins were recorded by Bobby Goulden III of Independence, Mo., Swartz and Bjorge, while Billy Moyer Jr. of Des Moines won the non-qualifier’s race.
Friday night’s feature was won by Larry Phillips of Springfield, Mo., over Kevin Gundaker of St. Louis and Larry Moore of Phenix City, Ala.
Moore was the fastest qualifier on the high-banked half-mile track with a lap time of 19.10 seconds.
Friday heat wins taken by Gundaker, Mike Crabtree and Bjorge while the B feature was won by Bill Martin of Council Bluffs, Iowa.