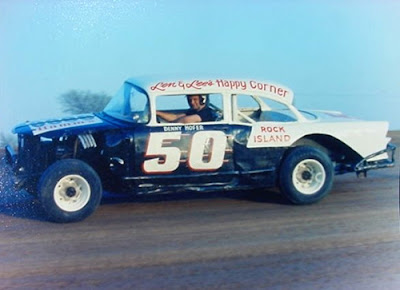 
Cedar Rapids, Iowa (May 12, 1967) - Veteran Benny Hofer may have surprised even a few of his avid fans last weekend at Davenport and Cedar Rapids in the season openers. The Rock Island, Ill., car jockey, who finished second at the Downs and sixth at Davenport in total points last year, did startle officials with his machine.
Hofer drove a Studebaker onto the quarter-mile oval for hot laps and observers failed to recall the last time that make of car adorned a track.


The Studebaker is equipped with a Chevy 327 engine. It's legal, according to stock racing rules, because Chevrolet actually built the engines for Studebaker when the Hawk hit the market.


Anyone who may have laughed when Benny made his appearance probably wasn’t laughing when the night’s racing program ended.


Benny showed once again he will be a driver to be reckoned with for the point championship by grabbing second places in a heat and semi event. He'll be ready to go again at the Downs Saturday when the regular racing program resumes at 8 p.m.


We were impressed with the way Promoter Frank Winkley and his Auto Racing, Inc., track crew handled the Hawkeye 200 affair last Sunday. Wink appears as nervous as an expectant first-time papa but he’s big-league all the way. He was on top of the action every second and at no time did we notice him let the fans suffer through a lull in the program. The guy is colorful.


All events were run off on schedule, plus Wink displayed a bit of showmanship by using the PA mike to let the fans in on the drivers’ meeting. Additional color was added when the drivers raced to their cars once they were introduced for the scheduled 200- lapper. All in all, it was a great show with some superb racing.