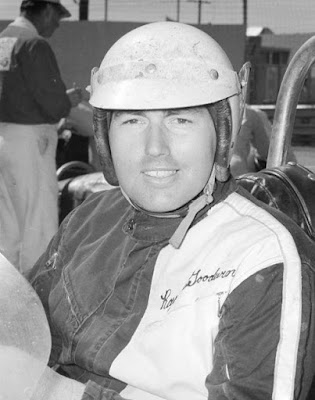 
Eldon, Iowa (May 28, 1973) – It was cold and damp at the Wapello County Fairgrounds on Memorial Day but the racing surface was perfect for the International Motor Contest Association sprint cars.
The track record was unofficially broke during hot laps but when it counted, Darryl Dawley of Sioux Falls, S.D., set quick time, touring the big half-mile dirt oval in 22.92 seconds, breaking last year’s record of 23.46 set by Dick Sutcliffe of Greenwood, Mo.
Dawley would claim a controversial win over Jerry Blundy of Galesburg, Ill., in the first heat. Blundy slowed on the backstretch with his arm in the air expecting a yellow flag to wave for Larry Cramblet of Macomb, Ill., who had spun into the ditch in turn two. The judges counted him in the clear and held green as Dawley shot by Blundy for the lead and the eventual win.
The second heat was marred by the only real accident of the program when Thad Dosher of Topeka, Kan., flipped into the wall in turn two, tearing out a section of corrugated steel and sending Dosher to a local hospital where he was treated and released. Bill Utz of Sedalia, Mo., took the win over Ray Lee Goodwin.
Larry Kirkpatrick, driving Jim Utt’s Chevy out of Algona, Iowa, started eighth, slipped through traffic to take the lead by lap 3 and went on to win the third heat.
Goodwin won the trophy dash in 1 minute and 58 seconds, a full 10 seconds faster than last year’s record of 2 minutes and 8 seconds set by Dick Sutcliffe.
The scheduled 30-lap feature was shortened to four laps when the rains came, turning the track surface to grease. The victory was given to Ray Lee Goodwin, the leader when the race came to a halt.