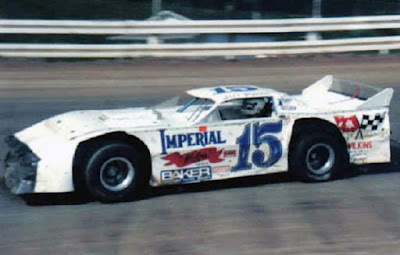 Lebanon, Mo. (May 10, 1986) – The USAC late models pulled into I-44 Speedway for their first-ever race, with 45 late models signing into the pits.
A field of race cars was star-studded but the skies threatened rain all day. Fortunately for everyone, the heat races, non-qualifier, last chance and the 40-lap main event were all run before rain.
Billy Moyer Jr. of Batesville, Ark., re-established himself as fast time record holder with a 15.14 second lap, edging Jeff Purvis of Clarksville, Tenn., by 1/100 of a second.
In the main event, Ronnie Hoover of Greenbrier, Ark., moved out into the lead at the drop of the green. Dick Potts of Morocco, Ind., established himself into second place followed by Jeff Purvis, sprint car pilot Gary Wright of Hooks, Tex., and Larry Moore of Dayton, Ohio. These top five remained unchanged for the first 12 circuits.
A patient Jeff Purvis made his first move going by Potts on lap 13. Purvis was content to see if he could force Hoover into a driving error. Purvis turned up the pressure and Hoover got loose in turn four on lap 18. Purvis took advantage and moved into the lead while Hoover lost three positions.
Larry Moore had also been slowly moving into the thick of things. He gained fourth spot on lap 15 and third on Hoover’s misfortune. Moore worked his way past Potts on lap 22, setting himself up for a two-car dash to the checkers.
Moore trapped Purvis behind lapped traffic on lap 25 and took his first lead. Purvis, however, would not allow his efforts to go in vain. On lap 31, Purvis was able to duck under Moore going through turns one and two. He was able to continue on ahead and hold the top spot the rest of the way to pick up the win.