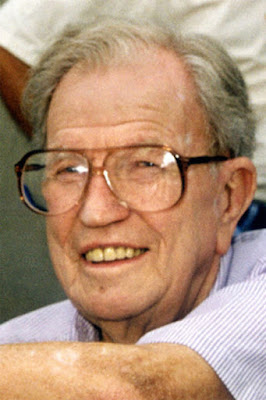 
(May 4, 1979) - Bill Lipkey was just in his teens in his native Fort Wayne when he first became interested in auto racing. Since that time, it's always been a part of his life and when he throws open the gates of the Kokomo Speedway May 13; he will mark his 28th season of promoting speed events here.
Bill took time out from preparing the Kokomo Speedway earlier this week to reminisce of those years in racing. Flashing his usual broad smile, he sat back at his desk and described how his hometown pleasure car club eventually turned into a racing organization.
Bill recalls he watched his first race back in the 1920s at in . Later, he regularly attended races at ’s “big track,” billed as the highest banked 5/8-mile dirt in the world. The track was operated in its early years by promoter Frank Funk.
In 1946, when the Mutual Roadster Association was running races in , Bill and several of his friends in formed a “pleasure car club.” They began with the idea of driving to races together.
One night a promoter asked them if they wanted to stage a stock car race. They leaped at the chance; took the glass from their autos and ran their first show.
Out of that race grew the Fort Wayne Racing Association and in 1947, the new racing group ran 76 races. They raced at , , Winamac, Converse, and among other tracks.
From its construction in 1946 until 1952, John Rose operated Kokomo Speedway, owned by the late Bert Miller. The track's two hottest drivers during the early 50s were locals Fenton Gingerich and Leon Meadows. So Bill and his friends brought some of the top drivers from the club to to challenge the two aces.
Bill was working for Polar Ice and Fuel Company's Marion Plant when Rose decided not to manage the track for another year. He approached Miller of the position but Miller said he would rather lease the track. Bill did just that and it’s been a 28-year relationship during which Bill and the track have both prospered.
Through the years, Bill has staged everything from camel races to foot races, USAC midgets to spectator spectaculars, circuses to thrill shows.
In 1954, he tried to promote a bloodless bull fight but gave up the idea after protests from local animal lovers. He gained more notoriety in 1961 when he petitioned the Interstate Commerce Commission for permission to build a spur track from the then Pennsylvania Railroad to the speedway and collide two steam engines head on in the infield.
When the big circuses were still playing under canvas, he brought them, to the parking lot south of the speedway. Even Barnum and Bailey Ringling Brothers appeared there until it gave up road shows for indoor performances.
He found that rodeos were not popular here but he has done well with sprints, hobby stock, midget, sportsman and figure eight competition, as well as thrill shows.
In his early years of promoting stackers, Bill built up eight cars and he and his eldest son, Vic, raced regularly. Bill says he regrets that he never became a professional driver.
Vic assists his father in the operation of the local track, flags the races and recently flagged one of the United States Auto Club's stock shows at Texas World Speedway. Bill’s younger son, Jimmy, who operates a local sign shop, has been driving sprint cars for the five years.
Over the years, there were light moments mixed with the serious racing. Bill remembers a particular night when the speedway was having a thrill show. Crash Brown had strapped himself to a high tower along with six sticks of dynamite.
His pet vulture sat near by as he readied himself for the death-defying act. As the crowd moved to the edges of their bleacher seats in anticipation, a man; just arriving at the track and somewhat under the influence staggered to the top of the grandstand entry ramp.
As he reached the top, the explosion resounded to climax the act. Bill, who was standing nearby heard him mumble, “That’s a hell of a way to run ah auto race!” The man, still mumbling, staggered back down the ramp and was never seen again.
Last year, Bill promoted 19 regular Sunday night sprint and hobby stock programs in addition to three midget shows.
When the snow flies in winter, Bill moves back to where he promotes racing and auto shows in Allen County Memorial Coliseum. The coliseum was constructed the same year (1952) that Bill took over the track. He asked coliseum manager Don Myers for a stab at promoting auto racing there and since that time has run every kind of racing event imaginable in the giant arena.
One year, he staged a racing jamboree, featuring every type of vehicle from motorcycles to sports cars. His USAC midget shows each January pack in a racing-hungry crowd looking forward to a new season.
Bill recently purchased Baer Field Speedway at , which he leases to promoter Rocky Fisher.
When Bill isn’t staging his own shows, he usually out watching other racing programs....whether its midgets at Indiana Fairgrounds or sprints on the high banks at , he always enjoys the sport of speed.