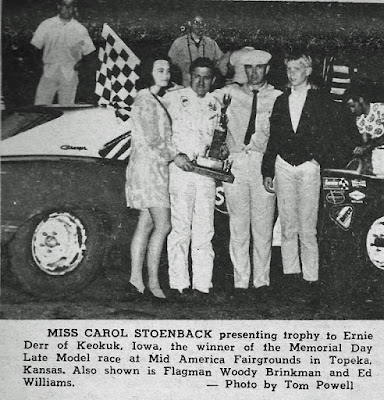 Topeka, Kan. (May 30, 1968) – “All I have to do to get more speed out of that car, is stand harder on the gas pedal.”
That what Ernie Derr, eight-time International Motor Contest Association stock car champion said prior to Thursday’s Memorial Day Classic late model stock car race at Mid America Fairgrounds. Derr made the statement in explanation of why he’s not too worried about losing three of his first four starts this season.
Thursday night he proved what he meant. Coming into the home straightaway of the half-mile track on lap 3 of the 50-lap feature, Derr saw an opening. It was a call for more speed…
He stood on it and the red 1968 Dodge Charger responded, and the Keokuk, Iowa, veteran was through the opening and in the lead. He was never in any danger of losing it for the remainder of the race.
Ramo Stott of Keokuk, Iowa, piloting a 1968 Plymouth, made a good race of it, but there was no catching Derr. His performance would indicate there will be a lot more Derr victories in the race ahead.
The biggest stock car field ever to appear here, 32 cars, was greeted by one of the largest crowds in recent years, 6,500. Every man, woman, and child was electrified by the showing of a bespectacled young man from Wichita, Kan., Leon Bowman.
Bowman finished no better than seventh in the feature, but his drive in the heat race made him the hero of the night with the fans.
Bowman drove a 1968 Mustang, the first of that breed to race with the stock cars here. It was the first time on the track for him in that car. In the third heat, he passed 11 cars to gain a victory worthy of a standing ovation from the crowd. After that, his every move was greeted with a roar from the paying customers.