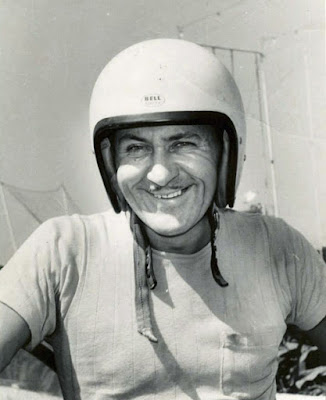 Mason City, Iowa (April 30, 1961) - A trio of hotshot drivers dominated the International Motor Contest Association late model stock car racing last season. Finishing in order in the final point standings were Ernie Derr, Ramo Stott and Dick Hutcherson.
An estimated 2,400 fans were on hand Sunday at the North Iowa fairgrounds to see the first big racing event of the season in the upper Midwest area. The finish in the 100-lap feature? Just the way they stood last year - Derr, Stott and Hutcherson.
Clearly, they were the class of the field. In fourth place was still another Keokuk driver, Jerry McCredie. By coincidence, he was driving Derr’s car in which he swept honors last year, a 1960 Pontiac. Derr now is driving a 1961 Pontiac while Stott and Hutcherson have 1961 Fords.
The winning time was 51 minutes and 19 seconds. That's pretty sharp considering Paul Burrow of Sycamore, Ill., went into the fence just reaching the straightaway on the northeast part of the track. There were eight slow-down laps while the wrecker pulled the car away. He was not injured. The accident happened on the 13th lap.
The first four finishers were the only drivers to complete 100 laps. Chub Liebe of Oelwein took fifth and was lapped once. Derr collected $385 of the total prize pot of $2,000 for his day's efforts.
The three-time IMCA national champ dogged Stott for the lead through the early part, finally passing him on the outside on the west turn in the 24th lap. The first three were in close order the remainder of the way.
McCredie had the fastest qualifying time of the day, 29 seconds flat for the half-mile oval. Ron Snow of Red Wing, Minn., took the first heat race over five miles as he held the lead all the way. Liebe took the second heat race and McCredie won the consolation.
This was an excellent field of 22 drivers, most of them in 1960 and 1961 models. Only 12, however, were in the running at the finish of Sunday’s feature.
Results -
1. Ernie Derr, Keokuk
2. Ramo Stott, Keokuk
3. Dick Hutcherson, Keokuk
4. Jerry McCredie, Keokuk
5. Chub Liebe, Oelwein
6. Don Harvey, Rockford, Ill.
7. Ron Snow, Red Wig, Minn.
8. Newt Bartholomew, Carlisle
9. Bob Reynolds, Edmonds, Okla.
10. Bill Moyer, Des Moines