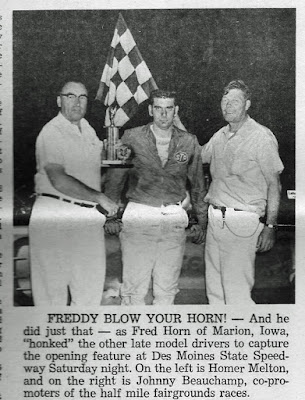 Des Moines, Iowa (May 3, 1969) – It was a nip and tuck battle for 13 laps in the late model feature at the Iowa State Fair Speedway on Saturday night.
The battle participants were Fred Horn of Marion, Iowa, and John Connolly of Delhi, Iowa
Connolly, driving his 1964 Ford, pulled into the lead on the first lap. Horn, who had the fastest qualifying lap of the evening, worked his way through the pack and edged closer to Connolly’s bumper.
Then, after a 13-lap dogfight, Horn took Connolly on the inside through turns one and two and was never headed the rest of the way.
Bill McDonough of Cedar Rapids, Iowa, piloted his yellow 1968 Camaro to third place, holding off Bill Moyer’s Corvette. McDonough was very impressive on the half-mile oval in his “little screamer”.
Horn as said had the fastest clocking in time trials with a time of 26.48 seconds with Lem Blankenship of Keokuk, Iowa, second fastest at 26.79 in his ’65 Plymouth. Bob Hilmer of Dysart, Iowa, was third fastest at 26.81 in his 1965 Chevelle.
Bill Moyer and Connolly were heat winners and Dean Montgomery of Milan, Ill., won the 15-lap semi-main.