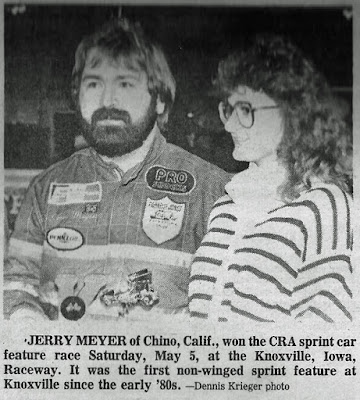 Knoxville, Iowa (May 5, 1989) – Jerry Meyer of Chino, Calif., collected his second California Racing Association (CRA) feature victory of the season as he led wire to wire during the fifth annual Midwest Tour at Knoxville Raceway on Saturday night.
The event, one of six scheduled CRA stops during the Midwest tour, was the first non-wing sprint car show at the Marion County Fairgrounds since 1982. Numerous track records fell despite the spring cold snap temperatures.
Meyer, who sits atop the CRA point standings, grabbed the immediate lead from his front row starting position in a race which went green for the entire 30-lap distance. He was chased closely throughout the contest by veteran USAC and All-Star Sprint regular Jack Hewitt. The Buckeye native made several challenging passing attempts on the half-mile oval but was never able to complete the charge and finished three car lengths behind Meyer at the checkers. Meyer received $3,000 for his winning efforts.
Mike Kirby and Mike Sweeney were third and fourth respectively while fast qualifier Clark Drake took fifth. Drake lowered Sheldon Kinser’s 1982 non-wing track record to 19.198 seconds.