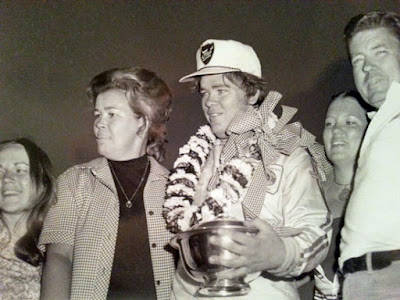 While it was a great day for younger drivers, previous winners of the event and established stars of the division experienced plenty of adversity.

George Snider, Bruce Walkup and Pancho Carter, winners of the 1971, ’72 and ’75 Hulman Classic, respectively, all failed to earn a starting berth in the main event.

Walkup was plagued by a series of mechanical failures in both cars he drove while Snider and Carter failed twice to earn one of the 20 starting assignments through the heats and semi-feature.

The only other previous winner to make the event, ’73 winner Joe Saldana, flipped his racer several times on the first lap and clearing the third turn wall. He was uninjured.

Front-row starter Jerry Weeks would out charge polesitter Clark Templeman at the drop of the green to take the lead. Weeks would lead the way until lap 19 when McElreath found traction in the upper groove and took the lead.

Templeman followed McElreath’s example and although he was unable to seriously challenge the leader, the move to the upper groove paid off handsomely as he secured a second-place finish.

Dana Carter appeared headed for a top-five finish when he slammed into the third turn wall on the last lap, demolishing his new car.