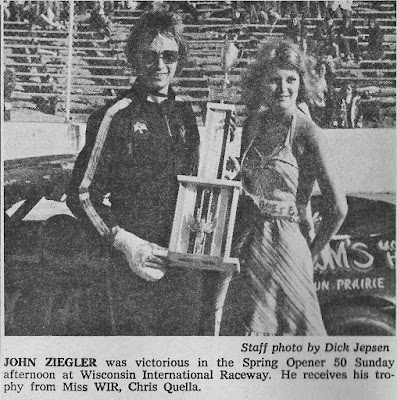 Kaukauna, Wis. (May 23, 1976) – John Ziegler of Madison, Wis., out battled Dick Trickle of Wisconsin Rapids, Wis., and Dave Watson of Milton, Wis., to win the Spring Opener 50 late model race at Wisconsin International Raceway on Sunday afternoon before more than 5,000 spectators.
Ziegler took the lead from Watson on lap 21 and held off challenges by Watson, Trickle, and Joe Shear of South Beloit, Ill., to chalk up the victory.
Al Schill of Franklin, Wis., came off his front row starting spot to pace the 24-car field for the first six laps before Beloit’s Gary Hemmerling took over the number one position. Watson then moved to the front on lap 12 with Ziegler close behind.
Ziegler then worked the inside and outside, looking for an opening, and found a gap on lap 21 as he slipped to the inside of Watson on the front stretch.
Watson would stay glued to the bumper of Ziegler until three lap from the finish when his engine soured. Trickle, the winner of the race last year, held down third position for most the race. On several occasions, he would pull even with Watson, but dropped out on lap 41 with mechanical problems.
With Watson and Trickle slacking their pace, Shear moved into the second spot to give chase to Ziegler, but was six car-lengths short at the checkered flag.
Following Ziegler and Shear to the finish line were Jim Sauter of Necedah, Wis., Watson, Tom Reffner of Rudolph, Wis., and Hemmerling.
In other action, Alan Kulwicki of Milwaukee won the accident-marred 15-lap semi-feature. Pete Parker of Kaukauna, Wis., and Marv Marzofka of Nekoosa, Wis., won 20-lap qualifying races.