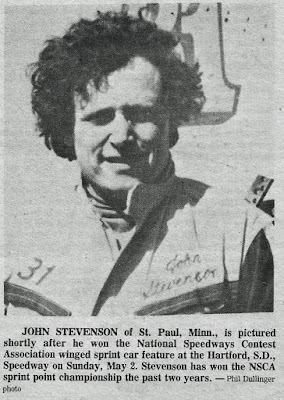 Hartford, S.D. (May 2, 1982) – John Stevenson of St. Paul, Minn., got a late start in his quest for a third straight National Speedways Contest Association sprint car championship, but he got off on the right foot as he won the feature race on Sunday afternoon at Hartford Speedway.
Stevenson had been foiled in earlier attempts to race NSCA events, including a snow storm that kept him in his native Minnesota while the first run was run a month ago at Sedalia, Mo.
Stevenson took the lead from Lou Kennedy of Winnipeg, Manitoba, Canada, on the 23rd lap of the 25-lap feature and Kennedy admitted he couldn’t hold off Stevenson any longer.
Kennedy took the lead on lap 2 and held on until Stevenson passed him. Kennedy said he lost his power steering and said he also “lost my arms and had to slow down”.
It wasn’t easy for Stevenson either, as the veteran driver took a rock to the helmet shield early on and drove most of the way with one hand on the wheel and the other covering his eyes.
Perhaps the best drive of the feature was Tim Green of Carmichael, Calif., who started in the seventh row and came all the way to second place behind Stevenson. Kennedy would hold on to third followed by Linus Mack of East Grand Forks, Minn., and Mike Pinckney of De Moines.
Heat winners were Bobby Geldner of St. Peter, Minn., Tim Baker of Sioux City, Iowa, Pinckney and Green. The B-main was won by Baker.