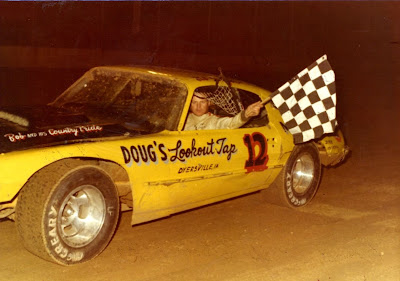 Bob Jaeger of Dubuque, Iowa, holds the checkers after winning the super stock special at Jackson County Raceway in Maquoketa, Iowa, on Memorial Day Weekend, May 28, 1977.
1998 - It was a great night of racing but a sad day on Sunday, May 30 at Interstate Speedway in Jefferson, S.D. Track owner Cecil Beauchene, who built the track in 1970, passed away recently after a long illness. Before racing, Mr. Beauchene's casket and a procession of race cars made a final lap around the track and a short memorial service followed. Rich Germar (modified), Jay Noteboom (street stock), Frank Schuller (hobby stock), James Demeter (chargers) and Kent Hustead (roadrunners) were the evening's winners.
1987 - Hot shoe Tony Weyant of Springfield, Ill., won the 25-lap winged sprint car feature Friday night, May 29 at Jacksonville Motor Speedway, making it his fourth win of the season. Weyant also set fast time (11:490) to nip Springfield's Ron Standridge (11:502). Weyant edged Standridge in the feature event followed by Saybrook's Dave Feese, Randy Standridge and Brian Tobin of Bloomington.
1977 - Bob Jaeger of Dubuque, Iowa, took the lead on the 12th lap after two restarts and then held off fellow hometowner Bob Kinsella to grab the Memorial Day super stock special at Jackson County Raceway in Maquoketa, Iowa on May 28. Last year's point champion, Jim Gerber of McCausland, Iowa grabbed third, Jim Leverington of Freeport, Ill., was fourth and Mark Liebfried of Rickardsville, Iowa was fifth. The 30-lap feature ended with 12 cars on the lead lap.
1971 - 31-year-old Tom Bowsher of Springfield, Ohio, walked away with the 100-lap ARCA feature at Capital Speedway in Oregon, Wis., on May 30. Taking the lead from the start, Bowsher lapped every driver in the 24-car field except runner-up Ramo Stott of Keokuk, Iowa. Bowsher, the 1970 ARCA rookie of the year, finished the 50 miles in 39 minutes and six seconds ahead of Stott, Ken Reiter of Louisville, Ky., Iggy Katona, Willis, Mich., Bill Clemons of New Albany, Ind. and Andy Hampton of Louisville.