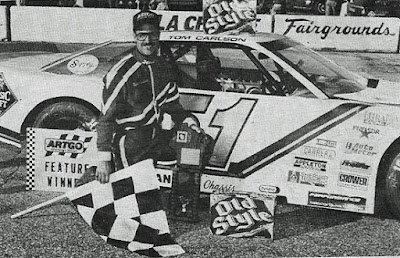 by Kyle Ealy
Cedar Rapids, Iowa - Mention the name Carlson up in Wisconsin and your first thought is Steve Carlson, who has dominated short tracks not only in the cheese state but all over the Midwest.
However, Steve wasn't the only Carlson from up those parts to make a name for himself. Older brother Tom Carlson did pretty well for himself in the 1980's and 1990's winning numerous features all through Wisconsin against the very best that short track had to offer.
In 1992, the La Crosse, Wis., veteran put together a string of victories in the always competitive ARTGO Challenge Series that highlighted one of his most successful seasons.
It started in the Badgerland 50 at the Milwaukee Mile on June 10th. Four lead changes among four drivers highlighted the 50-lap contest. Future NASCAR star Matt Kenseth grabbed the point before Steve Carlson took command on lap three. Steve held on to the lead until the 18th circuit when troubles brought him to the pit area. Dennis Lampman took over from there, putting his Ford into the top spot. Six laps later it was Tom Carlson taking the lead for good. Carlson managed to hold off a hard charging Bob Senneker to take the win with Lampman settling for third, fast qualifier (and future crew chief) Robbie Reiser taking fourth and ARTGO Series leader Jim Weber grabbing the fifth spot.
Fifteen days later on Memorial Day Weekend in Kaukauna, Wis., the ARTGO-sanctioned Spring Nationals 125-lap race took place before a crowd of 5, 606. Thirty late models started in the main event with Dennis Lampman coming off the front row to take the point and keeping it there for the first half of the feature. Meanwhile, Carlson sliced through the field and by lap 41 had worked his way up to third position, getting by Kenseth. Four laps later, Carlson moved around Bob Brownell for the runner-up position. Carlson closed in on Lampman quickly and on lap 48 sped past him on the backstretch to grab the point and seal the deal. From there, Carlson withstood a couple of cautions to take the seven-car length victory over Butch Miller, Jim Weber, Steve Carlson and Lampman.
The third victory for Carlson was his toughest. The ARTGO 100 at Berlin Raceway in Marne. Mich., had been rain-delayed for two weeks and even on the day of the race, June 6th, rain showers were imminent. Carlson, who started eighth, led only one lap but it was the final one as he edged past his younger brother Steve coming through turns one and two in an exciting side by side battle that had the fans on their feet. Michigan favorite Dick Harrington took third, Bob Brownell was fourth and Jim Weber rounded out the top-five. Seven days later at Illiana (Ind.) Speedway, Carlson started 24th in the field and charged through the field like a knife through warm butter but Joe Shear edged out Carlson to take the win and ending Carlson's impressive winning streak.
Carlson's season wasn't even finished as he came back a few weeks later and squeezed past rookie Rick Beebe on the last lap to win the Minnesota State Championship 100 at Elko Speedway on July 3.
To cap off his successful year, Carlson ended the 1992 season in spectacular style. At the 23rd Annual Oktoberfest Weekend, Carlson charged from the rear of the field to take the victory. Carlson elected to take the $500 Ultimate Challenge and started 27th despite being second fastest qualifier. Carlson passed seven cars on the very first lap, was up to ninth by lap 17 and was on his younger brother's bumper by the half-way point. Steve passed leader Rick Beebe on lap 53 for the lead with Tom getting by Beebe two laps later.
It was then Carlson vs. Carlson...
Tom got by Steve for the top spot on lap 62 and then managed to hold off his sibling for the remaining laps until Steve's tires wore out with 10 laps left. Beebe mounted one last charge but it was to no avail as Carlson held on for his second straight Oktoberfest title. Beebe held on to second with Joe Shear third, Steve Holzhausen fourth and Jim Weber fifth.
Carlson's win also made history as it was the first win in the new ARTGO Concept Engine which was presented as a cost saving option to the familiar 9:1 engine. The new engine featured cast iron, unported heads and a flat tappet cam.
Despite Carlson's five ARTGO-sanctioned wins, he finished third in the final points to champion Jim Weber and his younger brother Steve. Needless to say, Tom Carlson had a spectacular season.
To give you a better perspective on Carlson's accomplishments that year, Tom had eight career ARTGO-sanctioned victories in his career, five of them in 1992.