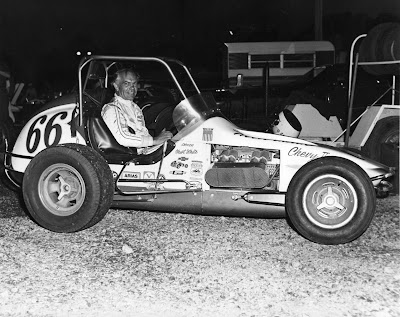 Warren "Newt" White of Lockport, Ill., driving the George Holterman Chevy II, won the 1973 United Auto Racing Association (UARA) championship. White scored five victories on the 22-event schedule.
Princeton, Ill. - They managed to give the fans enough thrills to keep them on the edge of their seats. The Bureau County Fairgrounds in Princeton, Ill., opened their gates on Memorial Day, May 25, 1973 to the UARA midgets for the first time ever on the flat half-mile circuit.
A full field of drivers were in attendance from six states including Lucky Mays of Gulfport, Miss., Elton Porter of Houston, Tex., John Tenney of Battle Creek, Mich., Danny Frye Jr. of St. Louis, Warren "Newt" White of Lockport, Ill. and Bobby Blume of Logansport, Ind.
Some guy named Rich Vogler of Glen Ellyn, Ill., set fast time in the Harry & Beth Turner Chevy II. Vogler's qualifying mark of 28.902 established a new track record. Vogler would start on the pole of the dash and win that easily over Jim McLean.
In the first heat it was Vogler-McLean again with Vogler also winning. The second heat turned out to be a duel with Bob Nichols of Columbus, Ind., and Roger Branson of Gridley, Ill., with Branson taking the victory. Danny Frye Jr. had no problem in winning the third heat. Bob Anderson of Burlington, Iowa got the jump at the green in heat four and had no problem. In the semi-main, Bobby Blume outlasted Bob Magee of Joliet, Ill., to take home the win.
Feature time found quite a few lead changes and that's what the fans came to see. Elton Porter took the point at the drop of the green and looked good until a blown cylinder slowed him on lap three. Frye Jr. grabbed the top spot followed by John Tenney and Newt White not far behind.
Tenney moved his Coxie Bowman Chevy into contention quickly and took over the lead with White, driving George Holterman's Cross Flow Chevy, on his tail. Third spot was claimed by Bill Humphreys.
That guy Vogler started making his way through the field as well and settled into fourth. Time and time again, Humphreys and Vogler challenged the top two spots but Tenney and White held their ground.

On lap 19 of the 25-lap main, White scooted past Tenney for the lead and led the charge across the finish line. Tenney settled for second, Humphreys took third, Vogler fourth and Ron Foster rounded out the top-five finishers. A disappointed Frye, who led early, finished sixth.
White would go on to win the UARA Midget Series championship in 1973.